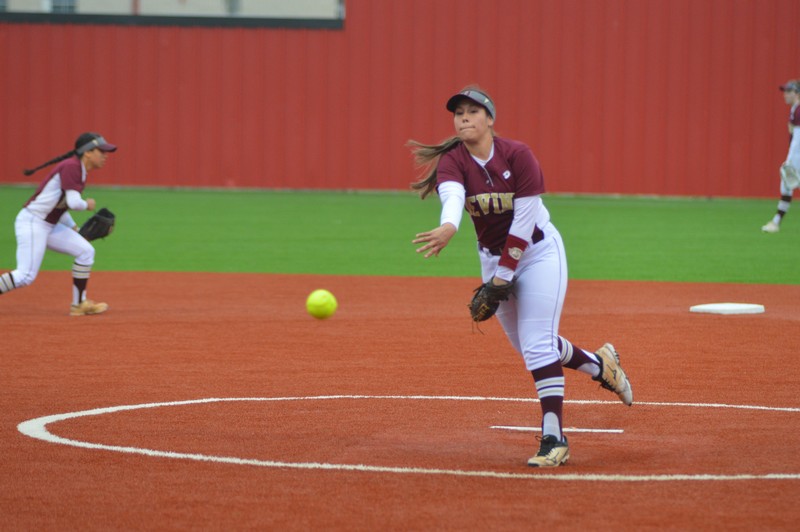 Last weekend, the Varsity Arabians competed in the Jourdanton Squaws Softball Tournament. After five hard played games, they brought home third place after facing Natalia, Sabinal, Lytle, Marion, and Natalia again in the semi-finals.
In their first game against Marion, Devine lost 1-7. Isabella Gutierrez pitched 48 strikes in 91 pitches this game and only had 7 hits against. Julie Ortiz had 1 hit. Kendall Arche 1 run, 1 hit. Jessie Ramirez 1 hit, 1 RBI. Megan Runyan 1 walk. It was a rough start to the tournament but they turned it around in their second game against Sabinal.
Sabinal earned the first two runs of the game and Devine rallied and earned 11 runs in the bottom of the first. Jeanette Rios was the first to score after an error by the catcher. Ortiz stole home to tie the game up at 2-2. Arche would score on another Sabinal error. Gutierrez hit a double to third and Arieana Ramirez ran home. Another hit from Mackenzie Schneider and Allison Taylor scored. Megan Runyan doubles to allow Gutierrez a chance to run home. Another double from Rios allowed Runyan and Schneider scored. With a runner on second, Ortiz hit an inside the park home run to earn two runs. The last run of the inning came when Arche scored when a Sabinal player had an error.
Rios had 2 runs, 2 hits, 2 RBIs, 1 walk. Ortiz 2 runs, 1 hit, 2 RBIs, 1 walk. Arche 3 runs, 3 hits. J. Ramirez 2 hits, 1 RBI. A. Ramirez 1 run, 1 hit. Taylor 1 run, 2 hits. Gutierrez 1 run, 2 hits, 1 RBI. Schneider 1 run, 1 hit, 1 RBI. McClellan 1 hit. Runyan 1 run, 1 hit, 1 RBI. Pitching: Schneider 28 strikes in 59 pitches. McClellan 14 strikes in 25 pitches.
The game against Lytle started directly after the Sabinal game and the Arabians were still on fire and won 15-0. Bottom of the first inning Rios earned the first run by stealing home. Tylor hit a double with two RBIs followed by an out of the park home run by Hagdorn with 2 RBIs. Bottom of the third, Gutierrez singled to bring home Taylor. With loaded bases a single from Rios brought home Hagdorn. Another single from Ortiz kept the bases loaded while Gutierrez was thrown out at home. Arche hit a single to center and earned an RBI. Wofford hit a single past short to earn an RBI and then another run when Lytle threw past the catcher. A. Ramirez was out with a hit to right field but hit in another RBI. Taylor hit another single to right. Last two runs of the game came when Gutierrez hit a double and brought in 2 RBIs.
In their first game Saturday morning, Devine faced Marion and came from behind to win. Down 0-2 in the bottom of the Devine earned 4 runs. Marion earned one more run in the third and Devine earned four more runs the bottom of the fourth to seal up the game.
Rios 1 run, 2 hits. Ortiz 1 run, 3 hits, 2 RBIs. Runyan 1 RBI. A. Ramirez 1 run, 1 hit. 2 RBIs. Taylor 1 run, 3 hits. Halle Hagdorn 1 run, 2 hits, 2 RBIs. McClellan 1 run, 1 hit. Gutierrez 2 hits. Janae Wofford 2 runs. Gutierrez threw 30 strikes in 59 pitches. Schneider 5 strikes in 17 pitches.
In the semi final game, Devine faced Natalia again and it was a rough loss for Devine. Natalia’s pitcher was able to get 28 strikes in 35 pitches. Devine was able not able to get a hit and the game would end 0-12.
Devine went 3-2 and earned 3rd place after the long weekend of games. The Arabians will compete in the Seguin Tournament at Huber Ranch and then Bandera at home next Tuesday night. District starts Tuesday March 19th against Carrizo Springs. Devine Arabians 3rd Place Team
“We finished the tournament in 3rd place, losing 2 games to a good Natalia team. Hats off to Natalia freshman pitcher Abby Woodson, she kept our sticks nearly silent throughout the two games we faced them. With that being said we are beating the teams we should be beating, and will continue to work towards our team goals that we have set for ourselves.” Coach Juan Gonzalez
All-Tournament Selections: Senior 2nd Baseman Julie Ortiz; Julie went 5-9, with 5 RBIs.
Jr. Designated Player Halle Hagdorn; Halle went 5 for 6 at the plate in 2 games, 7 RBIs, with a 3 run home run vs. Lytle.
By Dicy Chambers
Sports Writer