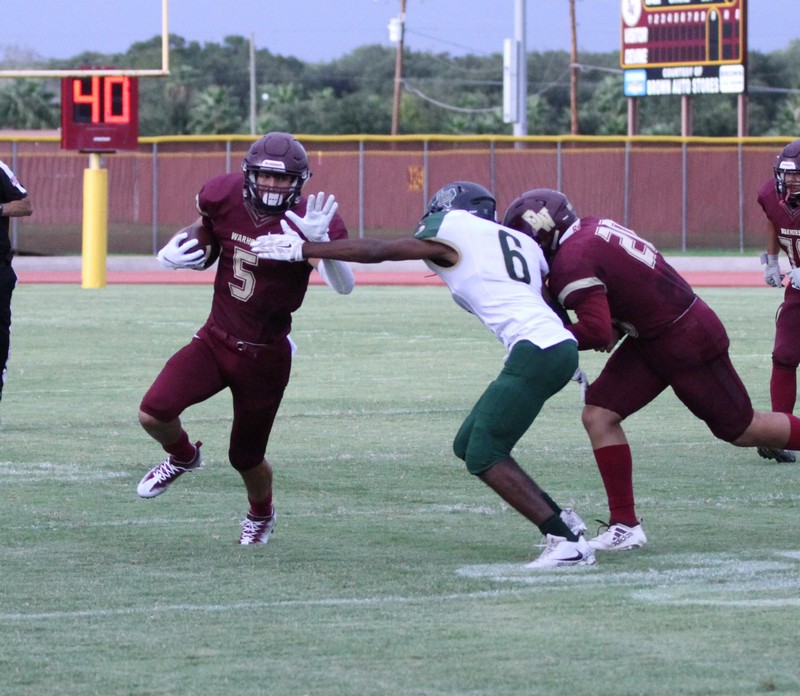 Head Coach Paul Gomez broke down the Warhorses 30-point offensive output against the Southwest Legacy Titans last Friday night in Warhorse Stadium by simply stating that it was “a big win for our team.”
A big-win is an understatement in my opinion. After losing several key players to injury, the Warhorses battled from the opening kickoff to the last second of the ballgame with several players stepping into new roles on the team.
“The boys played hard against another over 1,000 enrollment school. We played with a lot of heart and we are very proud of them. Offensively, we really shot ourselves in the foot in the first half. I felt that we dominated the time of possession but penalties and missed blocks really stopped our drives. I feel we should have scored on a reverse play and I feel we missed another scoring opportunity due to a missed assignment.
Being down 13-0, we could have put our heads down but we chose to keep fighting. Our boys believed and we made it happen. We had a big score on a screen to Donavon Camacho that turned the momentum our way and then we started clicking offensively. Their defensive tackles were big and hard to block but I am glad we kept pounding that rock until it went our way.
We were very efficient passing the ball as well. We converted a lot of third down opportunities that helped keep our drives alive in the second half.
Chad Lawson had a great night leading the offense. He made some great decisions and gave the ball to the open receivers. He also did a great job running the ball. Donovan was very productive and almost reached that 100-yard rushing mark once again.
Guido Zapata once again did a great job making big plays and our offensive line is steadily improving. John Schnautz, Jesus Hernandez, Tristan Ortiz, Aaron Rivera and Mason Perez, as well as our tight ends Jayce Hackebeil, Christian Gerlach and Zack Bocanegra continue to climb that ladder and get better daily. Coach PJ Wells called a great game.”
Offensive statistics
Passing: Chad Lawson 10 of 14 for 202 yards and three touchdowns. No interceptions.
Rushing: Lawson 10 carries for 102. Donavon Camacho 25 carries for 92 yards and one touchdown. Guido Zapata 9 carries for 72 yards.
Receiving: Zapata 4 receptions for 112 yards and two touchdowns. Camacho 2 for 52 and one touchdown. Isaiah Oropeza 2 for 20. Sergio Martinez 2 for 18.
By Jerel Beaty
Staff Writer