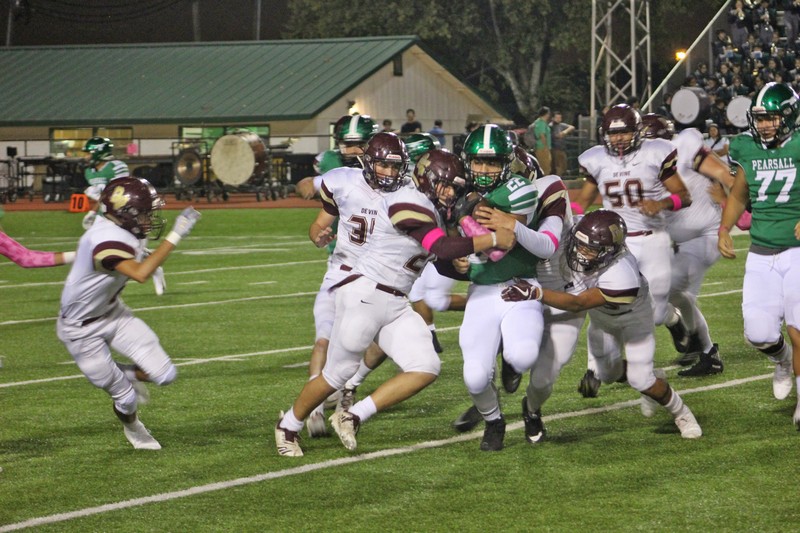 Click here for more photos of the Warhorses’ win over Pearsall!

Warhorse Defensive Coordinator George Villa’s defensive unit continues to dominate their side of the ball against district opponents. The Horses 2-1 district record could easily be 3-0 had one or two additional plays in any of the other phases of the game against Crystal City had gone it the Devine’s way
“We are all very proud of our defense’s effort,” Villa said regarding he and the other defensive coaches. “We’ve been preaching that type of effort all year long. Our kids know that these are must win games and it showed in their effort, attitude, and hustle. We made mistakes but our mentality of ‘hustle to the ball’ made up for our mistakes.”
There were not many defensive mistakes made by Devine. Pearsall had multiple short-field opportunities throughout the contest but only managed a single score towards the end of the first quarter. Other than that, Devine’s ‘D’ was on station to stuff the Maverick’s ‘O’.
“Demi Monreal had his best game of the season at the rover position. Blaine Miller’s fourth quarter play helped shut down a couple of Pearsall scoring opportunities. Overall, they did an excellent job of containing the edge. Pearsall has a good run game and we harped on that all week. Our kids really stepped up to the challenge.”
Devine’s secondary played exceptionally well. Pearsall’s quarterback was only 3 of 9 for 56 yards. Brady Cardenas’s interception led to Chad Lawson’s 1-yard run in the third quarter.
“We had some big plays from various players and positions,” Villa continued. “To begin, our defensive line played exceptionally well. Tristan Ortiz, John Schnautz, Hunter Nowicki, and Tristin Kennard were key to shutting down Pearsall’s inside running game.”
You can add the linebacker position to the list of standouts. According to linebacker coach Evan Eads, “Jayce Hackebeil began the game at defensive end and played great, but after a cheap shot by a Pearsall player caused Sergio Martinez to suffer a concussion, Hack had to move to linebacker. He played great during the fourth quarter.
Sergio was having his most aggressive game of the year. He flew around and really disrupted their offense. It was a shame he was injured as he was.
Brady Cardenas, who is our emotional leader, kept the defense fired up every time we went out. He was always around the ball, which is no surprise why he got an interception. He has a great knack for reading offenses. This was the linebackers’ best game and the kids are not going to have another bad game!”
Head Coach Paul Gomez heaped praise on the defensive unit as well.
“Our defense really saved us on Friday,” commented Gomez on the six points allowed by Villa’s unit. “We played a good game defensively against a big offensive line and against one of the better running backs in this district in Meme Cuevas.”
Just as Villa had stated earlier, Gomez knew it was a total effort by all on the defensive side of the ball.
“Our defensive line really dominated the line of scrimmage. Our inside and outside backers played an outstanding game. We held them to just 66 yards rushing which is outstanding. We played with more intensity, especially in the second half.”
Linebacker spotlight
The key to a great defense is having linebackers that are not tentative to play their position. Sergio Martinez, Brady Cardenas, and Jayce Hackebeil are nowhere close to being regarded as ‘tentative’.
Sergio’s 7 ½ tackles, 1 solo tackle, and 4 assists led the core. Brady was next in line with 2 ½ tackles, 4 solos, and four assists. His third quarter interception led directly to a Warhorse touchdown. Jayce finished with 4 ½ tackles, 2 solos, and 1 assist.
A great night around by that defensive unit.
Special team play
Devine had a chance to score one more touchdown on the final play of the first half. Pearsall was forced to punt at their own 25-yard line. Right end Jayce Hackebeil stormed through the blocking to get his outstretched hands on the football to block the punt. Demi Monreal caught the ball at the 11 and returned it to the Maverick 6-yard line.
Four seconds and one play is what the Horses had to score. However, the ball slipped through the hands of the Horses outside receiver as the clock hit zero.
Pearsall drove the ball to the Warhorse 5-yard line to begin the second half. With a chance to take the lead on a 24-yard field goal try, Tristan Ortiz came up with his second blocked kick of the season at the 7:14 mark of the third quarter.
A high snap that had the holder rising to catch the ball to place it down on the turf combined with their kicker being 4 ½ yards behind the ball instead of the normal 3, Ortiz bolted through the line to swat a possible 3-point, lead-changing kick out of the air.
By Jerel Beaty
Staff Writer