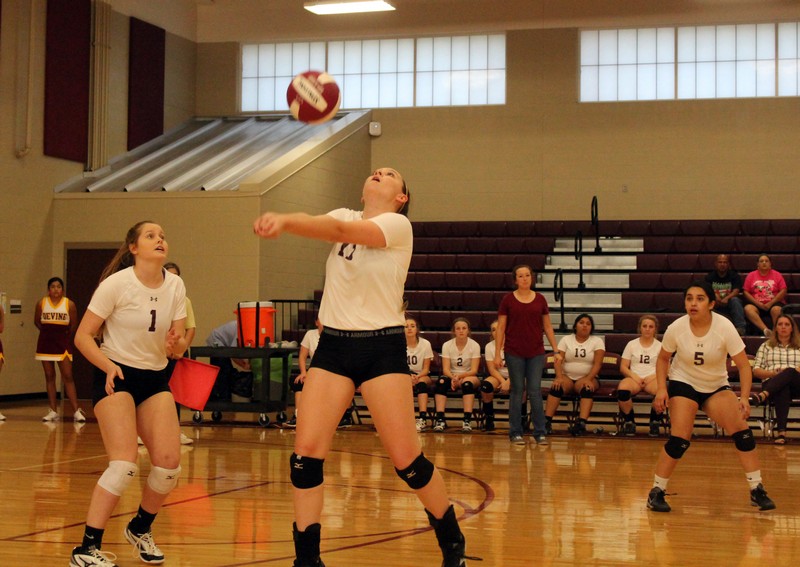 Click here for more photos of the JV Arabians!

In their final game of the season, the JV Arabians beat Pearsall in two quick sets 25-17 and 25-13. This win brings their impressive season to 12-8 and 7-1 in district. “I am very proud of these girls as they have grown tremendously this season! They have met the expectations that were set at the beginning of the year and finished off this season with seven consecutive wins!” said Coach Megan Perez
Alyson Taylor and Sydnie Harrel each had 6 kills, Janae Wofford 4, Iselia Gutierrez 2, and Kennedy Duncan and Halle Hagdorn each had 1. Allison Stevens and Destiny Moralez each had 4 aces, while Taylor and Wofford had 3 each.
“The beginning of two a days started with lots of potential from our players and quickly turned into a struggle of playing volleyball with raised expectations. I set high expectations for the girls and it took some time before the girls raised the expectations of themselves to play at a higher caliber level. Once the girls bought into this mentality, we started playing consistent successful volleyball at a competitive level.” Coach Perez
The JV team faced some tough losses such as the championship game against Pleasanton in the Devine Tournament and their first district meeting against Hondo. But by the second round of district the Arabians were unstoppable and beat Hondo in their second game of the season in what their coach said was their best game of the season. Positive energy and better work ethic in practice helped the Arabians improve every part of their game giving them the competitive edge they needed for their district
“I am really proud of these girls and how far they have come in just a few months. I hope the lessons they learned throughout this volleyball season translates over in to success for their other teams the rest of the year,” said Coach Perez
Coach Perez graduated from Tivy High in Kerrville in 2011 and played softball for Our Lady of the Lake in San Antonio. She will be coaching softball next.
By Dicy Chambers
Sports Writer