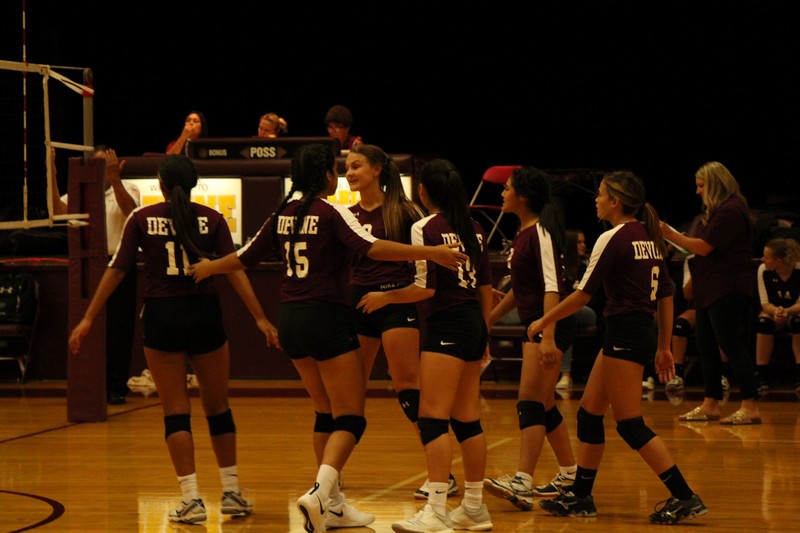 Click here for more photos of the Freshmen Arabians!

In their final game of the season, the Freshman Arabians beat Pearsall 25-7 and 25-12 and ended their season 14-7 overall and 6-2 in district. They finished their season strong and proved they had grown into a team that deserved a winning season.
“It was amazing to see every athlete contributing in this game. We had even kills and aces and some that helped take the lead quickly. I am so humbled to serve these girls and mentor them this season. I am looking forward to watching them grow as individuals, as well as, a team.” Coach Kimberly Lane
In their final game as freshmen Bri Torres and Darian Alvarez had 2 kills each and Lindsey Herrera, Aleyna Gerlach, Mayah Brogdon, and Lacey Shook each had 1. Brooklyn Crossland had 2 aces and went on a run of 8 points served, Lacey Shook 4 aces, Cece Martinez 2, Bri Torres 1, and Dylan Reyna 1 ace and a run of 5 serves.
In her second season here in Devine, Coach Lane is a Devine alumni and graduate of Tarleton State where she ran cross-country and track. Lane has coached junior high volleyball, basketball, track and high school volleyball, basketball, softball, and track in her seven years of coaching and teaching.
“I love coaching this age group because they are so eager to learn. I was excited about these Freshmen as I had heard a lot of great things about these athletes. They did not disappoint. This group has amazing talent and positive attitudes. Two a days started great. They came out ready and motivated. Our preseason was against very tough teams and the girls learned the fast pace of the game that they did not necessarily get from all of the teams in District. Our last game against Pearsall stood out because even though the girls were ending the season and moving on to the next sport, they remained focused to finish the game with a win. This freshman group of girls is extremely talented and passionate about their sport. If they remain as a unit and keep their heads together, I expect great things in their future. I was very proud to coach these individuals and have a successful season.” Coach Lane
Up next for the freshman Arabians is a full basketball season and Coach Lane will be preparing to coach track this spring.
By Dicy Chambers
Sports Writer