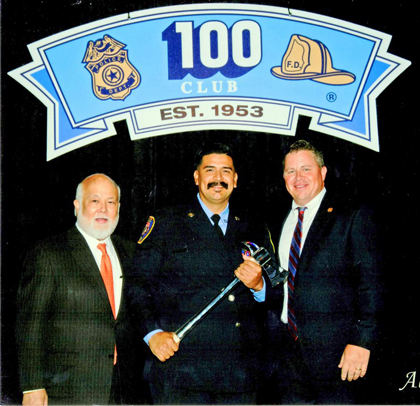 One of our local residents, Ronnie Vasquez, was awarded the 2019 Firefighter of the Year award by the 100 Club of Houston on May 16 at the 65th Annual Hero’s Banquet. Vasquez is the husband of Krystal Sepulveda and father of three kids, Samantha Lemus, Ronnie Vasquez, and Camila Vasquez. He is the son-in-law of Antonio Sepulveda and grandson-in-law of Amada Sepulveda, both of Natalia.

The 100 Club of Houston honors outstanding officers, firefighters and service animals in their 18-county coverage area at their Annual Heroes Awards Program, which is held in May of each year. Vasquez and his crew at Missouri City Fire and Rescue Services were nominated by their battalion chief and ultimately hand selected by the 100 Club of Houston for their actions in saving the life of a two-year-old boy.
From the 100 Club: “On July 11, 2018, Missouri City Fire and Rescue Services received a medical call regarding a reported drowning. Units manned by Firefighter Kevin Clements, Engineer Operator Justin Fox, Engineer Operator Stanton Lawson, Lieutenant Calvin Payne and Firefighter Ronnie Vasquez responded to the poolside scene to find a limp, unresponsive two-year-old boy receiving CPR from bystanders. The crew jumped into action, assessing the young child and taking over CPR efforts. The crew worked as a team in gathering information and performing CPR, successfully acquiring and advanced airway and providing advanced life support treatment. Medics soon arrived and, taking over CPR, found that a pulse had returned to the patient before departing to Houston Methodist Sugarland Hospital. The firefighters remained with the patient and continued to provide assistance and support during transport until they arrived at the emergency room. Their quick actions led to the patient’s return of spontaneous circulation before entering the emergency room. The child is currently back home in Florida and continuing treatment of the injuries sustained as a result of the accident. Clements, Fox Lawson, Payne and Vasquez are commended for their calmness under pressure, compassion and teamwork, which led to the saving of a young life against all odds.”
Vasquez currently resides in Natalia where he has been volunteering for the Natalia VFD since 2012. We congratulate him on this prestigious award and thank him for his continued service to the community.