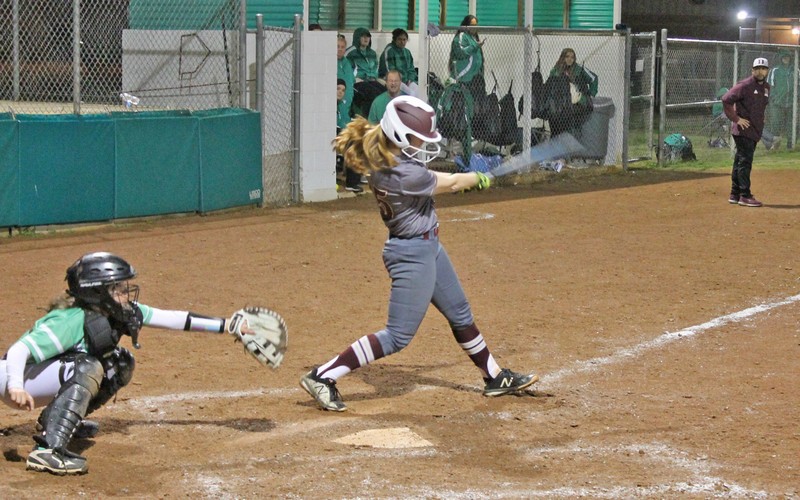 Facing 3 teams in Uvalde on February 2nd, the Varsity Arabians came home 2-1 after a long day of games. Opening against Marion, the Arabians won 8-1 but it was in their second game that Devine had to work hard for the win. Del Rio opened with 5 runs in the first inning and “the girls responded with four runs in the second and added three more runs in the third to take the lead 7-5. Del Rio scored one more run in the third to put the score Devine 7- Del Rio 6 final,” said Coach Juan Gonzalez.
Devine lost their third game to Uvalde 0-3 but it was still a great game with the team learning from their mistakes. Isabella Gutierrez and Mackenzie Schneider pitched great from the circle and despite some defensive errors, the Arabians were able to use the game to work off the dust and get ready for the season.
Varsity Arabians win against Pleasanton
In their home scrimmage against Pleasanton, on February 5th, the Arabians were on fire and opened with 9 runs off of 8 hits in the bottom of the first inning. They scored “10 runs on 4 hits, 2 walks, 1 hit by pitch, 7 errors, and a Home Run by Junior Halle Hagdorn that scored 3,” reported Coach Juan Gonzalez. Pleasanton scored one run in each of the three innings and the scrimmage ended after the top of the third with the score 19-3.
“Isabella Gutierrez pitched 3 innings giving up 3 runs, on 6 hits, 2 strike outs, 2 walks, and 1 error. Coaches are very proud of the performance tonight. We were relaxed and confident at the plate throughout each at bat. We stayed relaxed and battled well with two strikes all night. We were very selective at the plate and didn’t chase any pitches out of our zone. Besides one error we made the routine plays on defense and kept the ball in front of us in the outfield on base hits,” said Coach Gonzalez.
The JV Arabians tied Pleasanton 4-4 in their opening scrimmage. The Varsity Arabians will compete in the Navarro tournament this weekend and the JV Arabians will head to Uvalde for a tournament. Tuesday both teams will play in Marion followed by a varsity tournament in Jourdanton.
By Dicy Chambers
Sports Writer