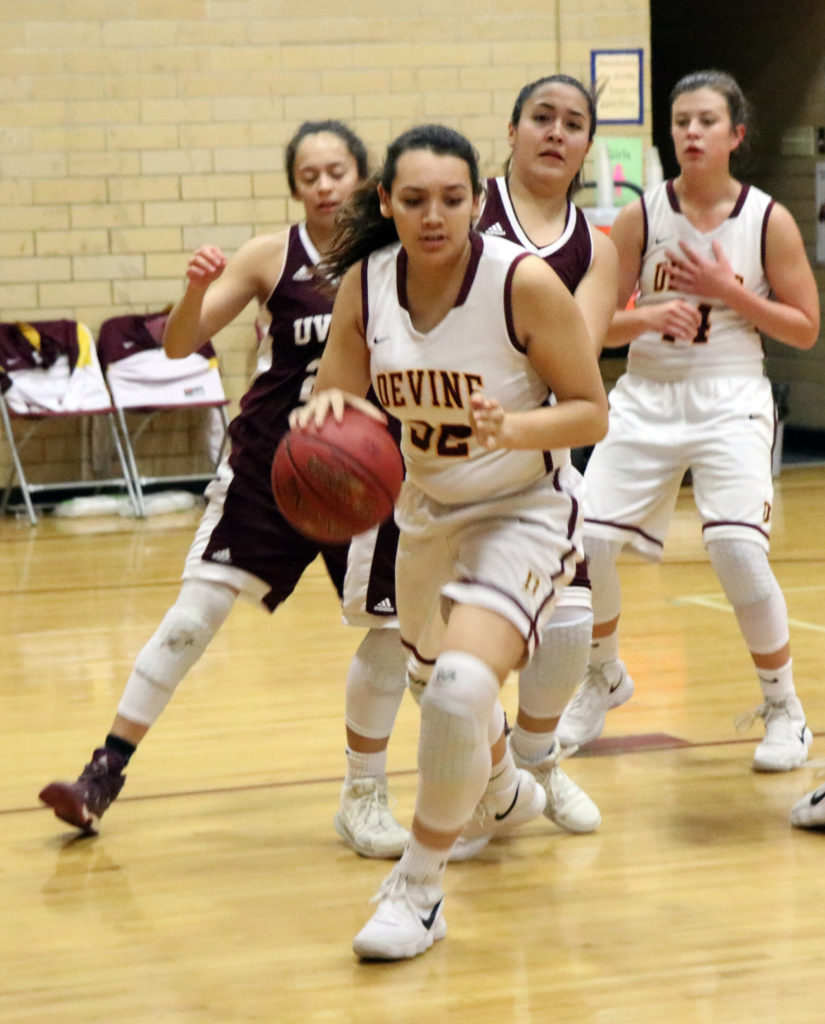 On December 5th, the Varsity Arabians played the Jourdanton Squaws and after a slow start they won 36-33. Struggling against an aggressive man defense, the Arabians turned it around in the 3rd quarter when they took the lead, outscoring the Squaws 17-5 bringing their lead to 31-22. But in the 4th quarter, Jourdanton fought back and came close to winning but fouled too many times and Devine was able to make enough free throws to win.
Chesney Friesenhahn scored 11, Preslee Quisenberry 7, Alissa Stehle 6, Lily Stricker 6, Sierra Pompa 4 and Maddie Mata 2.
Arabians win Championship
Beating opponent after opponent was no problem for the Arabians this past weekend when they hosted a tournament at home. Fighting fatigue and injury, the varsity team stepped up and beat all five teams they face to win the tournament.
Uvalde was the first to fall to the Arabians. It was an extremely close match at the end of each quarter. Trailing 12-17 at the end of the first, the Arabians outscored Uvalde 14-2 in the second quarter putting them ahead 26-19. The third quarter put the teams within 2 points of each other. The final quarter was tight but with a final score of 45-44 put the Arabians on top. Preslee Quisenbery and Lily Stricker each had 13. Chesney Friesenhahn had 6 and Maddie Mata had 2.
Facing Providence in their second match was an easier opponent but the Arabians did not let down their tough defense or aggressive offense. Providence could not score in the first quarter and only had 6 in the second. At the half Devine lead 19-6. In the third quarter the Arabians went into top gear and outscored them 22-10 and still had the energy to score another 14 points in the last quarter. With a final score of 55-24, the Arabian’s second match of last Thursday was no problem for them. Sierra Pompa led the charge with 12 points, Quisenberry and Stricker had 10 points, Mata 8, Abbie Whitaker 6, Friesenhahn 5, and Megan Runyan had 4.
Friday, the girls’ first game was against Bandera and still on a roll from the prior wins, the Arabians won 59-33. Leading each quarter and keeping the game at their speed was the key to their success. At the half the score was 24-9 and Devine played even harder in the second half. Pompa walked away with 16 points, Quisenberry had 9, Stricker 8, Whitaker 6, Friesenhahn 5, Clarissa Zamora, Alissa Stehle each had 4, and Runyan had 3 points.
Cole proved to be a tougher opponent but Devine led all except the 3rd quarter when the teams were tied at 27 each. Adjusting their plays and defense led the Arabians to outscore Cole 15-7 in the final quarter and made the final score 42-34. Quisenberry dominated with 18 points. Runyan had 7, Mata 4, Pompa, Friesenhahn, Whitaker each had 3 and Clarissa Zamora and Stricker had 2 each.
Saturday in their final match against Harper, the Arabians fought hard for their final win. Trailing 7-9 at the end of the first quarter, the Arabians outscored Harper in the second to make the score 16-11. The tired team was able to match their opponent point for point in the second half to maintain their lead. With a final score of 37-32 they were in first place for the tournament. Quisenbery and Stricker each had 8 points, Friesenhahn 7, Zamora 5, Whitaker 4, Runyan 3 and Mata 2.
With each game showing improvement in all parts and being able to adjust to each teams speed and defense led to the championship. “When we finished the last game, we had just finished playing 10 games in 10 days! Despite being fatigued I felt like we competed well in the tournament. It really was a good team effort. Everyone was able to pitch in and contribute in some way,” said a very proud Coach Jim Wells. With a season record of 14-5, the Arabians are coming together and playing as a strong team.
In the Devine Varsity Tournament, Chesney Friesenhahn, Abby Whitaker and Lily Stricker were named All-Tournament and Preslee Quisenberry was named Tournament MVP. Helping the Arabians win each game these girls played with determination and strength.
The Arabians head to Pleasanton on December 15th and to Cotulla on December 19th before their holiday break.
By Dicy Chambers
Sports Writer