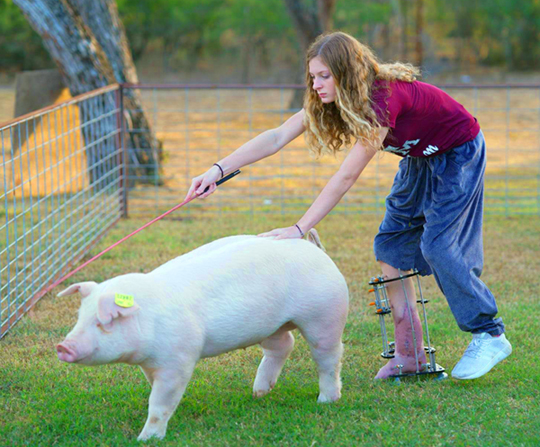 “What lies before us and what lies behind us are tiny matters compared to what lies within us.” –Ralph Waldo Emerson
Raising a stock show animal teaches responsibility and hard work, having to groom and feed the animals daily, constantly preparing for the big day. Sometimes it teaches courage and perseverance too, and that is especially true for one local student, Kylie Knowles, of LaCoste, who will be competing in the Medina County Jr. Livestock Show next week. Her family, friends, and teachers are so proud and simply blown away by Kylie’s determination.
This brave and hardworking young woman was involved in the horrible ATV accident which we reported in May of 2020. That terrible rollover accident has resulted in many surgeries in Kylie’s war to save her foot from amputation, but she won’t let it keep her down.
In an interview earlier this year, her mother, Karissa Barta, recalled that “University Trauma Center said this was one of the top five most gruesome injuries they have ever seen. Her foot was literally hanging on by part of an artery and a couple tendons…. If Newton her step dad didn’t react as fast as he did (making a homemade tourniquet to stop the bleeding) she would have died.”
From the very beginning, Kylie set her sights on defying the odds.
At that time, “They thought they might have to amputate,” Barta said. “The doctor hopes she would be able to keep her foot. She hopes she will be able to play a sport again, and says she wants to be an FBI agent.”
Kylie who attends Medina Valley High School, and is part of 4H as well as FFA, is now more determined than ever. Simple tasks like feeding the animals may take 30 minutes instead of ten minutes, but she has learned how to make it work.
“Kylie has overcome so many challenges including going back to school after having a bone graft along with her toes pinned. She has been showing pigs for years, and she is definitely working harder this go round,” Barta said

Kylie has made lemonade out of lemons in this lemon of a year we call 2020.
“The xfix device is holding her foot in place where she was missing the bone and now waiting for bones to grow together. The bones in her shin take most of the weight so that is why she can actually walk on it. All the rods through her ankle and foot hold it in place. She has to walk to stimulate bone growth. The more she walks, the faster the bones grow,” explained Barta.
She misses playing sports, but she is happy to help and part of the team as the basketball manager.
Head Girls Basketball Coach, Justin Russell stated, “In sports we talk about character all of the time. You can’t find out what kind of character a person has until they have come under some adversity….Kylie has inspired an entire community through how she has handled all of this. To see her pushing through the way she has gives me no doubt that she will achieve every dream that she has. She will be an inspiration to everyone that she encounters with her story of how she has overcome this. I am so proud of her and so thankful that I have the opportunity to be her teacher and coach!”
Over Christmas break, Kylie had a huge set back with a bone infection.
“They did 4 surgeries to clean it out and replace bone, so she might need another skin graft as well, but now she is walking so much more,” Barta said. “She has a pic line that we do meds through every 8 hrs in hope of keeping the infection away.”
One of her teachers, Mrs. Mosso stated, “Through what Kylie has experienced, I’ve seen her transform from a shy, adorable 7th grader in my Spanish class to a warrior with an admirable resilience. Keep persevering, Kylie!”
LaCoste 4H Manager Melinda DeCock adds, “I admire Kylie’s tenacity and courage…Most teenagers wouldn’t have the will nor would they choose to continue trying to live as normal of a life as possible! Being in high school is hard enough yet she shows up every day she is able and continues with her regular activities, even dedicating time to others by being a basketball manager! I’d also be willing to bet she shows her two pigs flawlessly next week at the County Show because of her dedication to her animals and herself! That is true strength!”
Her mother adds, “It can’t be easy, but she is pushing to see if keeping her foot is still best. She works so hard at school and life….And yet, Kylie often says ‘It could have been worse.’ She also told me she is glad it wasn’t her little brother who was hurt as he was on the ATV that day too.”
Her family must be so proud, and we thank them for sharing this inspiring story.
By Kayleen Holder
Editor