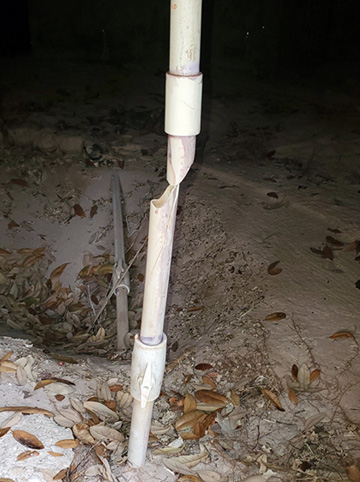 We will all remember the “Snowpocalypse of 2021” but for some local families, the nightmare still isn’t quite over. Pablo and Paula Carmona, of Devine, have owned and operated Anywhere Anytime Plumbing for about 18 years now. They are still working to help customers whose pipes were damaged in the unprecedented snow storm that struck our entire area.
“In all of our 18 years, we’ve never seen anything like this, nothing even close,” said Mrs. Carmona of Anywhere Anytime Plumbing. “Even now with the customers we have serviced, we are still booked all the way through April 16th.”
The Storm began around midnight on Sunday, February 14 with a huge 4-6″ snow that sat on the ground for days without melting due to the persistent freezing temperatures that dropped as low as 10 degrees, followed by another 2-3 inch snowfall on February 18th.
When asked how many people reached out for busted pipes, leaks and other havoc that the freeze caused in the plumbing of local homes and businesses, she simply said “I have lost count.”
“We had over 200+ plus calls at least, and had to turn some away unfortunately. We have serviced close to 145 since the snow storm. We still have at least 40 people left to service in this immediate area,” Mrs. Carmona said.
Many things made it hard to service the abundance of calls that came in at once.
“It was hard to find parts. Locally you couldn’t find them anywhere and had to stand in line for hours in San Antonio, just to see what they had.”
It wasn’t until the first or second week of March that most local stores were able to get more fully restocked with common plumbing supplies.
The 10 degree temperatures and several days that we spent at below freezing temps, were something nobody was ready for, at least not in South Texas!
“In South Texas we are used to just allowing our faucets to drip to get us through our normal freezing temperatures, but this time around the dripping was not enough,” Mrs. Carmona explained. “You had to have almost a full flow to keep the lines from freezing. On March 13, we handed out a pallet of bottled water here at the community center. We saw we still had so many customers without running water. With the amount of people we still had on our books alone, we knew we wanted to reach out and help.”
There was nothing ordinary about the plumbing disasters that local plumbers are encountering day after day, week after week, either.
“One customer called in 6 leaks, and it turned out to be 20 leaks. After the lines freeze, the pipe expands and it just cracks. You repair one spot, and then further down there is another crack in the line. These aren’t just fast and easy jobs,” Mrs. Carmona stated.
“So many people with water wells, had all of their pipes just burst completely,” Mrs. Carmona added. “A lot of people right now are just now able to get their wells fixed and running, but there are still too many leaks so that’s what we are running into a lot right now. We have people calling from hours away, begging to see if we could get to them before April. This storm did a big number. Unless you are servicing people with storm damages, many people just don’t realize the extent of damage that it really did. We would like to really thank everyone who has reached out to us, trusting in us to help them out in this time of need. We really appreciate everyone’s patience and understanding and continued support from the surrounding community during these times.”
By Kayleen Holder
Editor