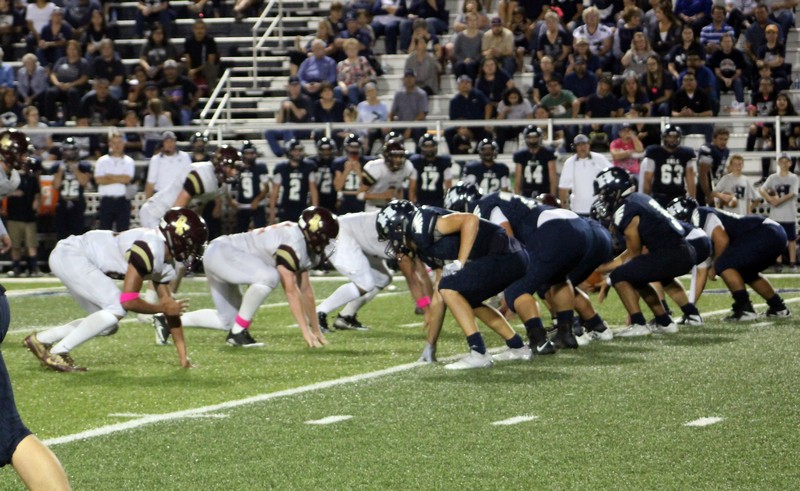 “From bad snaps, missed tackles and a botched fair catch attempt to a blocked punt due to bad snap, three decent returns and a blocked extra point, the night was truly special since we won,” Special Team Coach Scott Taylor said as only Coach Taylor can. “The night started with a 14-yard kickoff return by Guido Zapata letting us start at the 26-yard line which is what ended up being the average start position of the night.
Isaiah Oropeza gained 25 yards on one attempt; Brady Cardenas had 14 yards on one attempt and a successful fair catch. The one botched fair-catch attempt hurt the average starting position because it left us pinned at the 3-yard line. Without that mistake, the average starting point would have been a respectable 34-yard line.
We got to kickoff seven times, which is a good thing because it meant we scored six offensive touchdowns. Brady kicked the ball well for us with his average ball landing around the 20-yard line. We had some issues with our coverage and gave up more yardage than I would like but Hondo’s average starting point was their own 36-yard line.
Brady had two tackles on kickoff return while Blaine Miller, Zack Bocanegra, Chad Lawson, Colin Dishman, and Jayce Hackebeil each had one apiece.
Halftime adjustments helped shore up some of the issues that were present in the first half.
We punted four times which two of those had bad snaps. One gave Hondo a safety and the other setup a field goal attempt for the Owls right before halftime. Their kicker made the first attempt but fortunately, the play was negated by a false start penalty. The other two punts by Lawson after Colin came on to snap were 33 and 43 yards long for an average of 38 yards per punt. Guido, Isaiah, and Zack all combined for tackles on punt coverage.
We punt received twice. The first ball landed out of bounds giving us good field position at Hondo’s 44 and Zack blocked the second after an errant snap. Brady made the tackle that picked up blocked punt preventing them from getting enough yardage for a first down. We ended up with the ball that time on the Hondo 39-yard line.
We missed our only extra point attempt while Hondo was 1 for 2 with a failed fake extra point that ended in an interception by Guido. Tristan Ortiz blocked an extra point late in the game that kept our lead at three points. Jayce Hackebeil was right on Tristan’s heels during the play. Both young men gave outstanding effort on that play.
Overall, we had decent night in a big ballgame. As always, we will look to improve and hope to continue to find and exploit the other team’s weaknesses.”
Defensive
“Overall we did enough to win,” simply stated Defensive Coordinator George Villa. “We gave up some big plays but also came up with some big stops and some big plays when we needed them most. Our effort was great and I though we tackled well for the most part. There are definitely some things we need to clean up, but our kids will get there.”
“Coach Villa had a very good plan for the Hondo offense,” Head Coach Paul Gomez said. “Besides giving up a couple of big plays do to missed assignments, I think we played really good defense. Tristan Ortiz’s fumble recovery with the scoop and score was awesome!
Tristan Kannard, Brady Cardenas, Chad Lawson, Jayce Hackebeil, Tristan Ortiz, and Christian Gerlach had solid games on the defensively as well. Hondo makes it tough for opposing teams by running the veer. You have to play assignment football.
You have to have somebody for the dive, somebody for the QB, and somebody for the pitch. In addition, when they mix that in with lead, GT, and play action pass they can really mess with defensive schemes.
I am proud of our boys. We just kept fighting and played aggressively. Our defense has to keep improving and keep getting better.”
By Jerel Beaty
Staff Writer