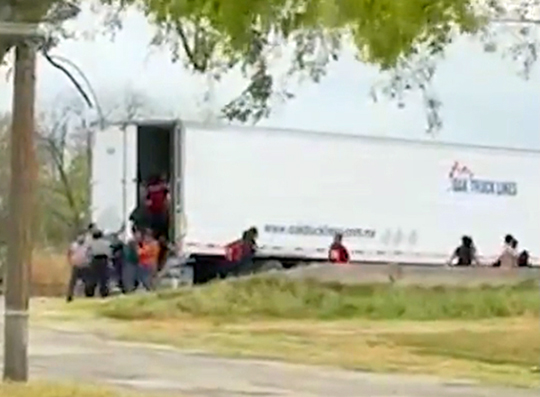 We spoke to both Medina County Sheriff Randy Brown and Frio County Sheriff Mike Morse, who say the number of illegal immigrants crossing the border illegally is happening at an alarming rate. Just this past Monday morning, deputies spent hours searching for a stolen F250 that came into Medina County from Frio/LaSalle and scattered near Devine.
“It’s worse than it’s ever been,” said Sheriff Brown, “We are battling this daily now. We used to have 1 or 2 a month, and now we are seeing 2 or 3 A DAY coming into Medina County from surrounding counties,” said Sheriff Brown, referring to pursuits of truck and train loads of illegal immigrants. Border Patrol is overwhelmed.”
The immigrants this Monday bailed out near Devine. Medina County, Frio County, the Game Warden, as well as Border Patrol assisted in this search.
“I don’t even know how many fences they went through before they bailed out and ran off into the brush near Morales Feedlot. There were maybe 12-15 people in that stolen truck,” Sheriff Brown said. “We were out there looking from about 9 till 1:30 today. They just jump out and spread out all over the countryside.”
“Coyotes are hauling them in mostly stolen F-250 or F-350 trucks, and they are able to find a way to ride the trains now too. Border Patrol had mostly shut down crossing on the railway before, but now they are spread so thin, they just keep coming,” Sheriff Brown said.
“And when it comes to the minors, we are bussing them to other areas and housing these people all over the place. I don’t mind people coming to the US, but come legally. A lot of these people are being pushed up by the Cartels, just in an effort to overwhelm Border Patrol. It’s sad.”
Zack Hedrick reported for News 4 San Antonio, that yesterday “500 unaccompanied children — all of them boys between the ages of 13 and 17 — will be arriving at the Freeman Coliseum Expo Halls TONIGHT…..Once they arrive, the kids will get “a brief medical check” clothing, toiletries, food and snacks and a place to rest. The intake center has room for as many as 2,100 beds.”
Frio County Sheriff Mike Morse agrees the number of incidents are really taking a toll.
“We are also seeing 2-3 of these incidents daily coming up I35 or 57, all of the major corridors. The aggressiveness of the people who are bringing people through illegally really concerns me…People who are operating these vehicles are getting pretty brave because there’s so much at stake. The chances are willing to take is concerning. It puts the people in the vehicle in harm’s way, but also the people on the roadway, so we are having to make some hard decisions when we have these pursuits. The worst scenario is when these pursuits come into a local city. What if it’s during school hours? It’s really dangerous with the traffic in a city.”
“A couple weeks ago there was an incident where around 67 people inside a semi truck trailer were apprehended on the South side of Pearsall, and I know another 10 or so got away. Another thing that concerns me is when those temperatures start going up, and we have those 105 degree days, the women and children and everyone in those vehicles are not going to be in a good situation, and if they escape running out into the brush with no water, that’s not going to be a good situation for them either,” Sheriff Morse said.
“Tomorrow we are meeting with someone about the possibility of getting a drone to assist in these searches,” Sheriff Morse said. “It’s a growing problem, but I am grateful that we at Frio County and Medina County deputies are able to work so well together, along with BP and Game Wardens to combat this problem.”