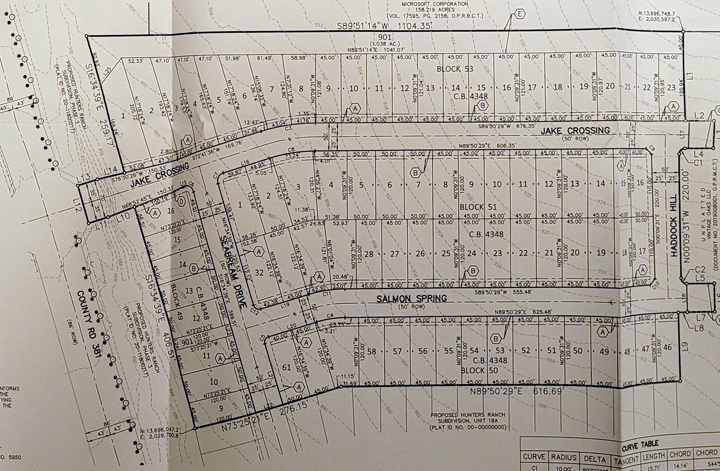 On Oct. 7, 2021 at 10 a.m., the Medina County Commissioners Court granted approval of developers who wished to plat or replat over 200 lots in the county.
The meeting started with the approval of the creation of Legacy Hills Public Improvement District in accordance with Chapter 372 of the Texas Local Government Code.
“This is a legacy build created for a public improvement district, you’ll see a companion item for this right after it,” Binford said.
The following related item being the approval on a Resolution authorizing Medina County’s execution of and entering into an Agreement regarding the development of Legacy Hills Public Improvement District.
“This one is much more into the woodlands than the other Legacy Hills buildings,” Binford said.
The court then moved on to discuss the preliminary approval to vacate and replat of Tract 7 in Devine Fields Subdivision. Kimberly A. Wells, AutoCad Draftsperson/Accountant, who represented Rothe & Assoc. in this matter, started the discussion.

This subdivision was started about a month or two ago and Rothe & Assoc. is trying to replat Tract 7 into three tracts and plan to build a water mineshaft for this single tract, while using wells for the rest.
Remediz Hernandez Jr. represented Hays & Assoc. for the preliminary approval of Casa Blanca Estates; Located in Precinct 1 off of County Road 4513. The four 5.00-acre tracts, out of 248.8958-acre tract for this plat have already been drilled.
Andrew Ortega, Project Manager represented Moy Tarin Ramirez Engineers on the discussion on the potential preliminary approval of Units 18A and 18B in Hunters Ranch Subdivision including 166 lots.
Located in Precinct 2, the East Side and off of off of County Road 381 this development is planned to have 87 residential lots in 18A and 79 residential lots in 18b. Both units will have public water, public sewer and public streets. The city of San Antonio has already given MTR engineers preliminary plat approval on this plan.
Andrew Ortega also represented MTR during the discussion to take possible action and approval of Potranco West Subdivision, Phase 11 Unit 1.
Located in Precinct 2 off of FM 1957, Potranco Road this subdivision is being built on a 17.006 acre tract of land. While this construction will technically be considered a separate development from the rest of Potranco Ranch with a separate left hand turn access road entry point; it’s still considered a part of the 41 acres it sits on.
“This is part of the Potranco Ranch West NDP that was just recently approved,” Ortega said. “It’s the first space of the development…, more west on Potranco. But this one is a private development, with private streets.”
Ortega explained that even though this is a private development, with a private sewer, it’d be on public water.
“This is a larger lot than the other residential ones,” Ortega said. “44 total lots and they’re thinking of starting on construction within a month.”
By Christian Toler
News Correspondent