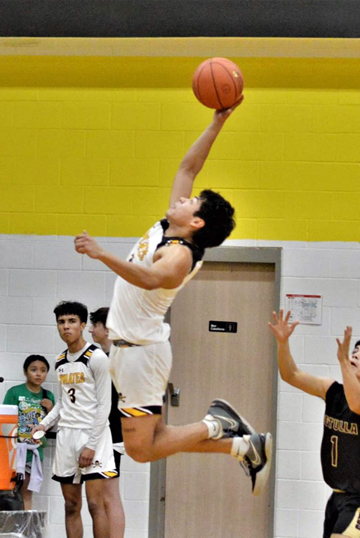 The Lytle Pirates went 4-1 against Jourdanton, Corpus Christi London, Poteet, Eagle Pass, and Cotulla. This brings their district record to 4-0! Now #11 in the state, Lytle was set to face Poth (last night) and Dilley this Friday at home. Dilley and Poth are expected to be Lytle’s toughest district competition this season.
Before the holiday break, the Pirates faced Jourdanton and made quick work of the Indians. Winning 88-47, “Junior Jordan Balderaz led all scorers with 33 points and 12 rebounds,” said Coach Jacob Hernandez.
Taking a road trip down to Corpus Christi, the Pirates took on London. Ranked #5 in the state, London was a tough opponent, but the Pirates put up a good fight. “What a game, with both teams playing great defense, it was a back and forth battle all game. The Pirates went cold in the fourth quarter and lost 45-37,” added Coach Hernandez.
Back in district play, Lytle made quick work of Poteet and won 68-39. Coach Hernandez was proud of the hard work and said, “the Pirates were led by Juniors Jordan Balderaz with 20 points and 13 rebounds while Malakai Castro scored 14 points, 5 rebounds, and 4 steals.”

Monday night against Eagle Pass, the Pirates made quick work of the game. Winning 73-47, Junior Jalen Guevara led the team with 20 points, 6 rebounds, and 4 steals.
On December 30th, the Pirates ended their break with a big win over Cotulla. “The last game of the Christmas holiday, the Pirates took on the Cotulla Cowboys and won 87-30 to go 4-0 in district play. Juniors Jordan Balderaz had 23 points, Malakai Castro had 22 points, and Guevara had 18 points,” reported Coach Hernandez.
Last night’s game with Poth had district title implications on the line.” The Pirates are ready for the challenge and will be ready to battle tomorrow night and every night!
By Dicy Chambers
Sports Writer