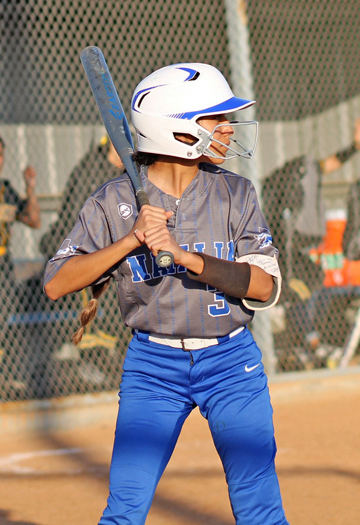 The Natalia Lady Mustangs picked up win #25 Monday night in Lytle as the girls in blue completed their season sweep versus the Lady Pirates. Natalia belted out 15 hits as Freshman Abi Woodson held the black and gold to two hits and accounted for 12 Ks in the road win.
The victory set up a huge 30-3A battle this coming Thursday in Natalia as the Jourdanton Squaws come to town for a battle for the 30-3A title at 7:00 p.m. at Lady Stang Field.
“I was proud of the way we came out and took care of business,” Coach Tara Gonzales said.
Natalia set their offensive tone in their opening at bat. Taty Alvarado put pressure on the Lytle defense early, putting a ball up the middle the Lady Pirates couldn’t handle (error). KK Lara connected on a single to the right side as Bivi Figueroa belted a single to right field allowing Natalia to take an early 2-0 lead.
The Lady Pirates were able to get their lead off-batter on in the bottom of the 1st courtesy of a rare Woodson walk, but Natalia responded forcing a 5-3 ground-out followed by a Woodson K. A second and final rare walk took place with their clean-up batter, but the Lady Stangs recovered with a 1-3 defensive play to end any threats by the black and gold.
In the top of the 2nd inning, Mena Figueroa accounted for the lone hit of the inning, but no runs would score.
In the bottom of the 2nd, Woodson struck out two and forced a 5-3 ground-out erasing any hopes for Lytle.
Natalia scored their third run of the game in the top of the 3rd inning. Natalia used a Lara single, a stolen base and a B. Figueroa single to take the 3-0 lead.
Woodson was on fire in the bottom of the 3rd, as she struck out two in a row, before forcing a fly-out.
The Lady Stangs took a commanding lead in the top of the 4th. Natalia used a Bryanna Perez base on balls, a M. Figueroa single, an error put into play by Gabby Contreras, a triple by B. Figueroa, an error put into play by Trista Vera and a single by Woodson to score five big runs allowing for a 8-0 lead.
Lytle had no luck in the bottom of the 4th. After watching their 3rd batter in the line-up get on courtesy of an error, Woodson sat down three straight Lady Pirates putting an exclamation mark on the Natalia lead and dominating effort defensively.
The girls in blue did their final damage in the top of the 6th inning. After watching their second batter ground out, Natalia used a B. Figueroa single, a Vera single, a big triple by Woodson, a single by Gabi Santoya and a triple by M. Figueroa to score four final runs. This fueled Natalia to a lop-sided 12-0 run rule victory.
Lytle did get their only two hits in the bottom of the 6th. They had their first runner advance to 3rd for the game, but Woodson assured Natalia of the win with three strike-outs to shut-down rival Lytle in fashion.
At bat: Vera 1-4-2runs scored, Taty Alvarado 0-4-1run scored, G. Munoz 0-3-1run scored, Contreras 0-4-1run scored, M. Figueroa 4-4-2RBIs-1run scored, Lara 2-4-1RBI-2runs scored, B. Perez 0-3-1run scored, Woodson 3-4-2RBIs-1run scored, Santoya 1-1-1RBI, B. Figueroa 4-4-4RBIs-2runs scored.
Woodson pitched 6.0, allowed two hits, walked 2 and struck out 12 in their victory.
Defensive Put-Outs: B. Figueroa 3, Contreras 2, Alvarado 1, Vera 1, B. Perez 1. Assists: B. Perez 1, Woodson 1.
Upcoming Games
As mentioned, the Jourdanton Squaws come to town Thursday night for the final “scheduled” regular season game. All of the marbles will be on the table, as Natalia needs a win in order to tie the Squaws and win a share of the 30-3A title.
If Natalia was to win, they would be able to force a 3rd game for seeding, or the coaches could opt to flip for seeding purposes.
On paper, the “easier” route per-se is winning 1st and going to the bottom half of the bracket. The top half of the bracket includes power-houses #1 Hallettsville and state ranked Santa Gertrudis Academy to name a few.
The Bi-District Playoffs will begin April 25th-27th at a site TBA versus an opponent TBA. It is unknown as of press time, if Natalia won, when and if they would face J-Town for as 3rd and final battle.
By Eric Smith