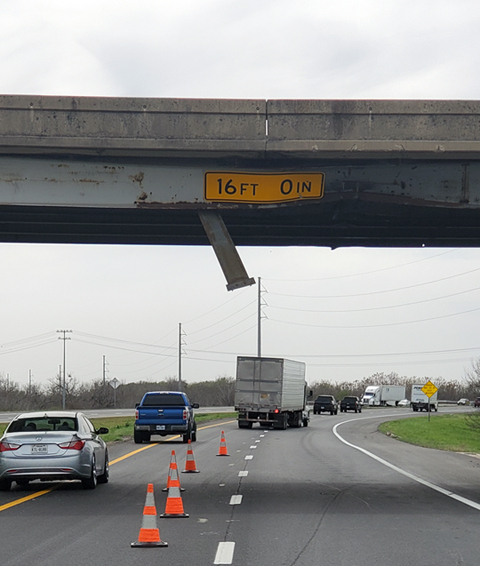 Overnight traffic that would normally travel over the damaged IH-35 overpass at FM 3176 will be routed through Devine while the Texas Department of Transportation works to repair the bridge.
Officials from the City of Devine met with TxDot representatives on March 16 to discuss the bridge, which Mayor Cory Thompson said wasn’t expected to be fixed for about three months.
“Long story short is, obviously, they’re going to have to reroute traffic because they’re going to have to shut down 35,” Thompson said at the Mar. 16 Devine City Council meeting. “They’re going to have to reroute traffic through Devine, not that we can really do much about that because 173 and 132 are state roads.”
The bridge has been closed since Mar. 14, when a truck carrying an oversized load damaged or knocked out several support beams.

TxDot’s current plan is reroute nighttime traffic Sunday through Thursday down Hwy. 132 to the Four Corners intersection, then along Hwy. 173 to the IH-35 access roads.
“They’re supposed to be turning this set of stoplights and the stoplight at Oak Hill, Walmart, into flashing lights during those periods,” Thompson said. “They are supposed to be hiring off-duty police to actually monitor the intersections.”
While the bridge itself is likely to be out of commission for several months, traffic will only be diverted for about two weeks while the bridge is repaired.
“It could be longer, but at the moment, they told us is two weeks to basically rebuild that bridge,” Thompson said.
The City is concerned about morning bus routes and residents who venture to Walmart and Triple C later in the evening, as well as ingress and egress from properties along Hwy. 173.
“Obviously there’s not much we can do about it. They have to fix the bridge.”
City officials are scheduled to meet with TxDot in a pre-construction meeting to nail down details at a later date.
By Marly Davis
Staff Writer