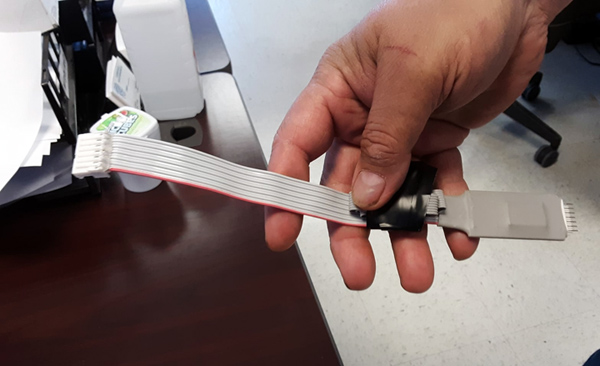 Castroville Police Department issued a statement earlier this week warning that a credit card skimmer had been found inside pump #4 at Kwik Pantry (1116 US Hwy 90 W.) The device used to collect victim’s credit card numbers and information was found after a local bank alerted authorities. This is just one of many skimmers found inside Medina County pumps in the last year or so.
“We received a call from the County Sheriff’s Office that a local bank contacted them after some of their customers had experienced debit card fraud, and it was traced back to card use at this particular gas pump,” said Castroville PD Chief Brian Jackson.

Medina County Sheriff’s Office has a device to detect skimmers, and does random checks of pumps to combat the ongoing problem.
“I’d estimate that we’ve had at least a couple dozen skimmers found in Medina County within the past year. We had a run of them in the D’Hanis area especially,” said Sheriff Brown. “We actually caught and arrested suspects some time ago in the D’Hanis area who were in possession of more skimmers and even had keys to gas pumps.”
“We have a scanner that will detect the skimmers, and we check pumps randomly here and there, but you just have be aware when you are putting our card into the pump,” said Sheriff Brown. “Make sure everything looks secure, like it hasn’t been tampered with. Sometimes weird numbers will appear on your blue tooth of your phone if a skimmer is being used. That’s because most of the card information these skimmers pick up is sent to the criminals wirelessly as it skims your card.”
Please use caution when filling up your vehicle. Look for the sticker that is placed on the lid that opens on the face of the pump. If the sticker has been tampered with, it’s possible that someone has gotten inside the pump. Some of these new skimmers “are hidden completely inside the pump.” But some are on the outside, Sheriff said.
Chief Jackson also advises residents to use the credit function, instead of typing your pin number into a gas pump.
“For your safety, use the credit function, so if there is a skimmer, they don’t get your pin number too. If they get your pin number they can get cash an ATM anywhere, they don’t even have to make a purchase. They can do almost anything if they’ve got your pin number,” Chief Jackson said.
“These things are pretty sophisticated and hard to track. A lot of times, the info gets sold on the dark web. Always be on the lookout for out of state charges on your credit or debit cards.”