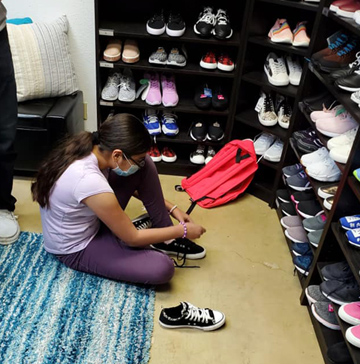 This week, we’d like to run this special feature about the life and work of a San Antonio woman, Cathy Hamilton, who is making such a huge difference in the lives of area foster children.
One of the young ladies she has helped, told us all about her program SA Threads, so we wanted to feature Cathy this week, who is the founder of SA Threads and was also a CASA volunteer for many years.

“Cathy is one of the best human beings I know,” said Gloria Martinez, 20, who is so appreciative for her mentor Cathy, who does so much to help kids in foster care programs across Texas. “It just amazes me how much Cathy can do. I never really had nice, new clothes before I met Cathy. She got me new things and she even let me pick them out. That might not seem like much to someone whose had that their whole lives, but it was really cool to have a choice, because I never did growing up. Usually kids in CPS care just get handy-down things or things other people have picked out for you. It’s nice to be able to pick out something new that’s just for you. And now Cathy has helped thousands of kids!”
In 2016, Cathy founded the program SA Threads. Her bio states Cathy witnessed years of drug and alcohol abuse, domestic violence, and child abuse in her young life, but she refuses to be a victim. She is a proud survivor. She says her past is not an excuse; it is what propels her forward, what has created her future.
An outsider could never have known Hamilton’s internal turmoil and quiet, constant questioning of why so many children continue to be victimized. The first step Cathy took to address her gnawing concern for abused children was to become a Court Appointed Special Advocate (CASA) in 2010, where her extraordinary efforts to find a forever home for a very special-needs boy and his 3 siblings garnered her the CASA Volunteer of The Year Award.
Cathy’s next case as a CASA volunteer became the turning point of her life – and the lives of so many others. The teenager in this case desperately needed braces, but since Medicaid would not provide them, of course, Hamilton found a way. Utilizing her fierce advocacy skills and penchant for action, she created a fundraiser so her teenager got the braces she needed and deserved. But the need for braces paled by comparison to the indignity her teen, and most teens in foster care, suffer: wearing thrift store and hand-me-down clothing. Some have never had new clothes.
The ultimate insult and embarrassment for Cathy’s young lady was having to wear used underwear, bras, and socks from a barrel of second-hand, bleached essentials. That was the seminal moment for Ms. Hamilton. She knew that foster teens deserved better and she decided she could and would do something about it.
Knowing she needed ideas, money, and a place to do business, Ms. Hamilton began relentless research, networking, and fundraising. Her vision was a boutique where teens could come shop for new clothes, shoes, and especially those essential undergarments. Through an electronic bulletin board called Bexar Necessities, Boys Town Texas generously donated the space for what is now San Antonio Threads, a 501C3 charity offering new clothing and personal care items for deserving teens – boys and girls. Under Cathy’s leadership as CEO, and President of the Board, San Antonio Threads offers a compassionate, fun shopping experience for teens in foster care, those who have aged out of the system, homeless youth, victims of emergency situations, and those being released from detention facilities. From its inception in August 2016 through June 2017, San Antonio Threads served 700 teens in the greater San Antonio area.
In July 2017, when Boys Town made the decision to leave Texas, Cathy and the San Antonio Threads Board of Directors found themselves “homeless” with only 30 days to find new donated space and vacate Boys Town. The community passion to find another donated space for the San Antonio Threads boutique included the voices of prominent city leaders who understand this is the only organization in the San Antonio area that provides NEW clothes for FREE to deserving teens and that this little grass-roots charity needed to survive and continue its mission. Christian Assistance Ministries (CAM) stepped up and offered their second-floor space which is now the new home of San Antonio Threads.

Neither Hamilton as an individual nor society at large has been able to stop child abuse. But Cathy has kept her promise to herself to make a difference in the lives of those who have suffered at the hands of others. #NEWTreads #FREESelfEsteem
SA Threads is located at 10446 Sentinel Street, San Antonio, TX 78217 or be contacted at (210) 600-3989 or SanAntonioThreads.org.
San Antonio Threads is a 501(c)(3) non-profit organization providing NEW clothing, personal care, and more for teen girls and boys in foster care, & other at-risk youth for FREE.
They are in need of volunteers, and you can inquire online. Volunteers can visit their website to learn more or email Laura at referrals@sanantoniothreads.org
As of March 1st, the organization has served 16,469 youth since opening their doors in 2016. In 2020 alone, they served 9,233 youth.
San Antonio Threads is in need of VOLUNTEERS! Back to school is just around the corner and is our busiest time of year. Volunteers perform a number of tasks including helping our youth shop, processing new merchandise, helping us with special projects, and at events.