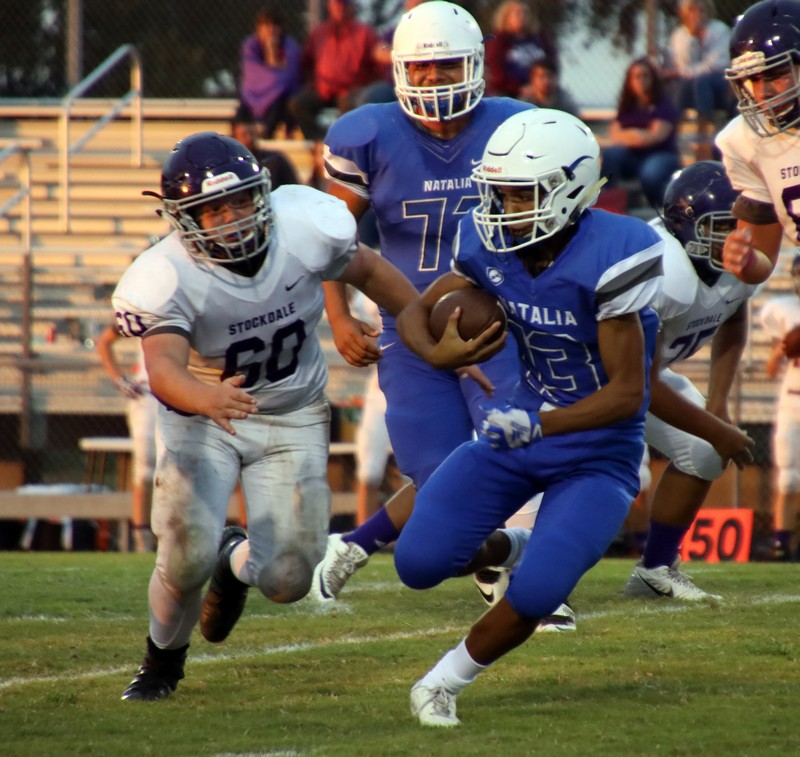 JV Mustangs– The Natalia Junior Varsity Football team continued their winning ways, as they remain undefeated on the season. They were able to thump the Stockdale Brahmas at home last Thursday with a huge 32-8 victory.
Scoring touchdowns for Natalia included: Adrian Vasquez (1-rushing), Nate Banda (1-rushing/1TD Throwing/1-Interception), Jacob Navarro (1-TD Throwing), Felix Iniguez (1TD Reception) and Tanner Crone (1-interception/return).
“We continue to improve and we are excited about taking the field this Thursday against Dilley,” Coach Jeff Terry said.
NJH Mustangs– The Natalia 7th Grade Mustangs were able to snag a tight road victory on Thursday in Wilson County. According to the coaching staff, this was by far the toughest game of the season and the boys in blue were able to win a tight one 28-22.
Luis Buentello led the offense, scoring three touchdowns. Paul Zapata scored once.
Looking at 8th grade action, the Mustangs came up short 38-12.
“The size difference really played in their favor, but we gave it everything we had,” NJH Coaching staff stated.
Daniel Tristan and Gianni Rios each scored once.
Upcoming Games
The Natalia JV Mustangs welcome Dilley in town Thursday at 5:30 p.m. The JH will play a combined game in Dilley Thursday at 5:00 p.m.
By Eric Smith