“We are getting our Post Office back!” said Natalia resident Willa Woodson happily, which was the talk of the town this week!
Natalia Residents have been driving by, honking and stopping to watch and hear the good news as the demolition phase began last Friday, July 5th of the old burned up building which housed the Natalia Post Office. Bidding and building phase will come next. It’s been almost a year since the big fire.
Nearly one year ago a terrible fire burned down the Natalia Post Office August 3, 2018, as an electrical pole fell on it during working hours and fortunately the Post Master Laura Mann escaped unharmed. 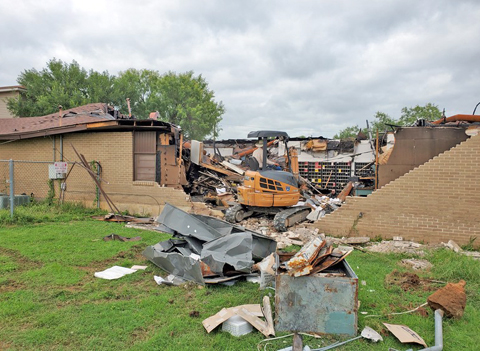 Crews were out demolishing the building this week except for the 2,000 sq foot slab. Core samples will be taken of the concrete slab to see if it is sound enough to rebuild on, or if it will need to be taken out as well.
Dana and Wyatt Woodson of Woodson Materials took care of the demolition of the building down to the slab and clean up. Next phase will be bidding process and rebuilding the structure once the samples come back.
It is unknown the exact time frame of the new construction at this point but the town is excited and word is spreading rapidly of the good news.
Customers have been traveling to the neighboring town of Lytle, Texas to their Post Office to get their box mail since the fire and take care of business.
Back in August of 2018, the US Post Office issued a press release stating that Natalia post office customer service would be “temporarily re-located to Lytle Post Office” and it has been that way ever since.
We reached out to the US Post Office Public Relations team and are awaiting an answer on press night as to what the future plans are for the Natalia Post Office.