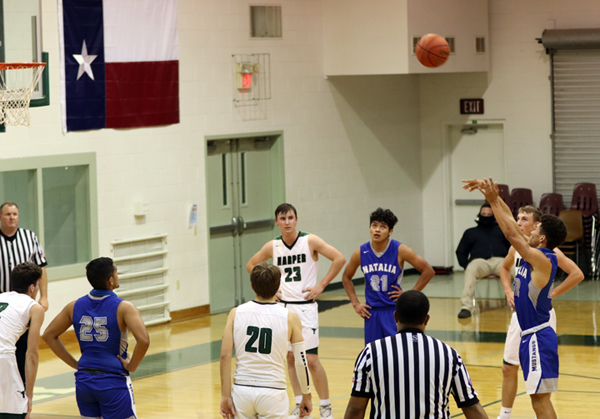 Harper
On Tuesday, the Mustangs traveled to Harper looking to pick up their first win of the season. The Mustangs got off to a quick start and took a 17-13 lead at the end of the first quarter. It was a back and forth game throughout as the 2nd and 3rd quarters ended with a 1 point lead for Natalia. The 4th quarter proved to be the difference as the Mustangs were able to hit some key free throws down the stretch that allowed them to escape with a 58-51 win to improve to 1-1 on the season. Jared Stallworth led the way with 18 points and 9 rebounds. Coltin Richardson also had 14 points and 8 rebounds. “I was really proud of our kids for finding a way to win. It seemed like every time we went up 5, Harper would come right back. They had some opportunities to take the lead in the 3rd and 4th but our guys did a really good job of getting stops defensively and turning them into points on the other end.”
Carrizo Springs
On Friday, the Mustangs were in action in Carrizo Springs looking to follow up a big road win but struggled to get things going offensively. A stingy Carrizo Springs defense held the Mustangs to just 26 points on a tough shooting night. Carrizo Springs jumped out to an 11-3 lead in the 1st quarter but never looked back as they ran away with a 44-26 victory to drop the Mustangs to 1-2 on the season. David Silva scored 9 points and had 3 rebounds. Enrique DeOsio contributed 6 points and 4 steals for the Mustangs. “Overall, really tough shooting night for our guys. The same shots we were hitting on Tuesday just didn’t want to fall tonight. Defensively I thought we did a pretty good job holding them to 44 points but we have to do a better job on the offensive end to win games.”
Devine
With no tournaments this season due to COVID restrictions, the Mustangs hosted an unusual Saturday morning game this past week as Devine made the short trip to Natalia. The Mustangs were looking to rebound after a tough shooting night on Friday but things did not come easy. The 1st quarter was a quarter of runs as Devine would take a 13-7 lead. The Mustangs came out in the 2nd quarter with some energy and were able to cut the deficit to 3 as they went into halftime trailing by a score of 20-17. A big 3 pointer by David Silva in the early minutes of the 3rd quarter tied the game up at 20-20 but the Mustangs couldn’t get a stop on the defensive end. This led to a couple offensive rebounds and an easy score for the Warhorses that sparked a quick 9-0 run to give them a 29-20 lead. The Mustangs struggled to recover from the run and fell to Devine by a score of 39-32. David Silva and Fabian Ruiz each scored 7 points. Jared Stallworth and Enrique DeOsio scored 6 as well. “I was really proud of the effort all game long. Again, we struggled to score and that quick 9-0 run for Devine really put us in a hole with our struggles offensively. I thought we had another great game defensively and it is something that is going to have to continue to move forward if we want to be successful.”
Schedule for upcoming week – Wednesday vs. Stockdale, Friday at Pearsall, and Saturday at Three Rivers.
By Coach Justin Welsh