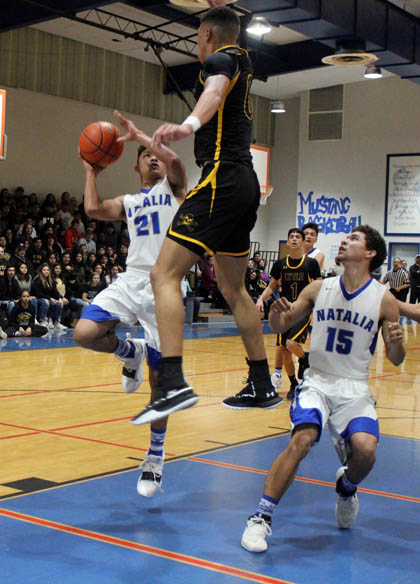 Despite playing on their home court last week, the Natalia Mustangs struggled offensively versus the Jourdanton Indians. Natalia was held to single digit scoring in three of their four quarters as they suffered a 59-27 loss in 30-3A.
Brewer, Gonzales and Lilly sparked the Jourdanton Indians in the opening quarter which truly set the tone last Tuesday night in Natalia. The three young men combined for fifteen of the twenty first quarter points.
On the opposite end, Natalia struggled to find the basket as they relied on buckets by Juelian Armendariz and Jared Stallworth along with two free throws by Matt Contreras resulting in a fourteen point deficit after the 1st quarter of action.
Natalia did a much better job defensively in the 2nd quarter, as they held the Indians to five points. Unfortunately, the Stangs continued to struggle as Daniel Ramirez accounted for the only basket, as two additional free throws resulted in only four points being scored. This resulted in a 25-10 lead at the half for the Tribe.
In the second half, both teams had their best offensive quarters of the contest. Lilly and Reyna had hot hands for the Indians, fueling them to a 23-point effort.
On the opposite end of the court, Stallworth and Contreras nailed 3-pointers accounting for a portion of the 13 points Natalia produced. As a result, the Indians remained in control 48-23 going into the 4th quarter of action.
Jourdanton outscored Natalia 11-4 in the final quarter of action en route to a solid 59-27 win over the Stangs.
Scoring Leaders: Stallworth 7, Contreras 6, Armendariz 5, Faelan Villarreal 3.
By Eric Smith