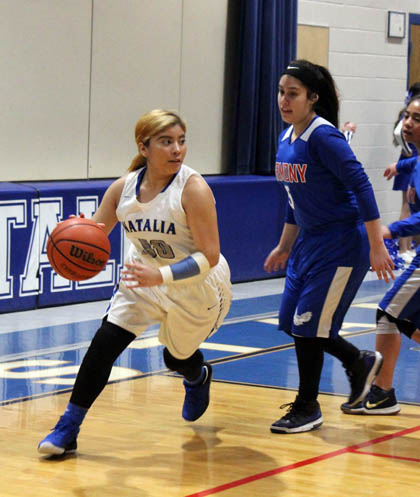 The Natalia Lady Mustangs came out and nearly matched the 30-3A Champions step for step before falling short down the stretch versus the Jourdanton Squaws. The final minute was a fun one, as this game didn’t end without a bit of controversy. When the buzzer sounded, it was the Squaws who were able to upend the Lady Mustangs 47-43 resulting in a 4th seed finish for the Lady Mustangs.
“Our kids played extremely hard,” Coach Doug Lum said. “We gave ourselves a chance to win in the 4th quarter, but sometimes things just don’t work out in your favor.”
The Natalia Lady Mustangs found themselves down by four points (45-41) with 1:03 left in the game. Natalia was dribbling down court on a 6-0 run when a travel was called, resulting in a turnover and giving the Squaws the basketball back. J-Town called a time-out. With about 7 seconds left on the “time-out clock”, the Squaws had already broke the huddle and were back on the court. As Natalia wrapped up conversations, the ball was handed to Jourdanton despite the time out “time allotted” not ending. As a result, the Squaws had a clear path to the basket allowing them to go up six points in crunch time, something Coach Doug Lum didn’t take well.
When asked for comments on the issue after the game, he had already contacted basketball chapter officials and preferred not to comment any more on the issue since he had spoken to the officials and also contacted head chapter officials.
Unfortunately, this seemed to take the wind out of the sails for the Lady Mustangs. Jourdanton was able to hold on down the stretch for a 47-43 victory over the Lady Mustangs.
Early on, this was a neck and neck contest and one Natalia led by one point after one quarter of play 13-12. In the opening quarter, Natalia used efforts by Sam Stallworth (4 points), Zita Perez (5 points including a 3-pointer) along with buckets by Angie Zapata and Jelli Padilla to produce the 13 point effort.
In the second quarter, Jourdanton had their best offensive effort of the game. They nailed two 3-pointers and used scoring by five different players to produce a 16 point effort.
Natalia on the other hand, was held to buckets by Mariah Joseph, KK Lara and Raven Sanchez resulting in a 28-19 deficit at the half.
In the 3rd quarter, Natalia got a surge, as Raven Sanchez worked hard getting on the line a number of times. She was able to knock down five of six free throws leading scoring efforts, as Joseph, Padilla, Perez and Katelyn Corona also added buckets allowing for a 13 point quarter.
Defensively, Natalia held Jourdanton to a game low 8 points resulting in a 36-32 deficit for the Lady Mustangs going into the final quarter of play.
There, the girls in blue matched the Squaws step for step including the six point run mentioned above. Leading the offensive efforts was Perez, who not only accounted for a bucket down low and a free throw, but a 3-pointer as well. Additional efforts offensively included a free throw by Sanchez, a bucket by Padilla and two free throws by Corona. Unfortunately, it was not enough as they gave Big Red a run for their money before bowing out 47-43.
This was the second time Natalia had given the champs a true four quarter battle, as they fell 48-40 in their first meeting in Atascosa County in their first round battle.
“I am extremely proud of the effort and how far this team has come this year,” Lum said.
Scoring Leaders: Perez 13, Sanchez 8, Padilla 6, Stallworth 4, Joseph 4.
Sub-Varsity recap
The Freshmen Lady Mustangs ended the season 8-6.
“We played with relentless effort all season and came up with big wins against Stockdale JV, Jourdanton JV, and Lytle JV,” Coach Samantha Crowley said. “These girls fought hard all year long and I can’t wait to see them grow together as a team.”
The JV Lady Mustangs finished the season with an impressive 14-2 record, and an undefeated district season. The only losses the girls had came early on in the season at the Pearsall Tournament against Devine and Poth.
“This group of girls grew tremendously throughout the 2018-2019 season, and I cannot be more proud of the work and determination they showed,” Coach Erica Callaway said. “I’m excited for the future of Lady Mustang basketball!”
By Eric Smith