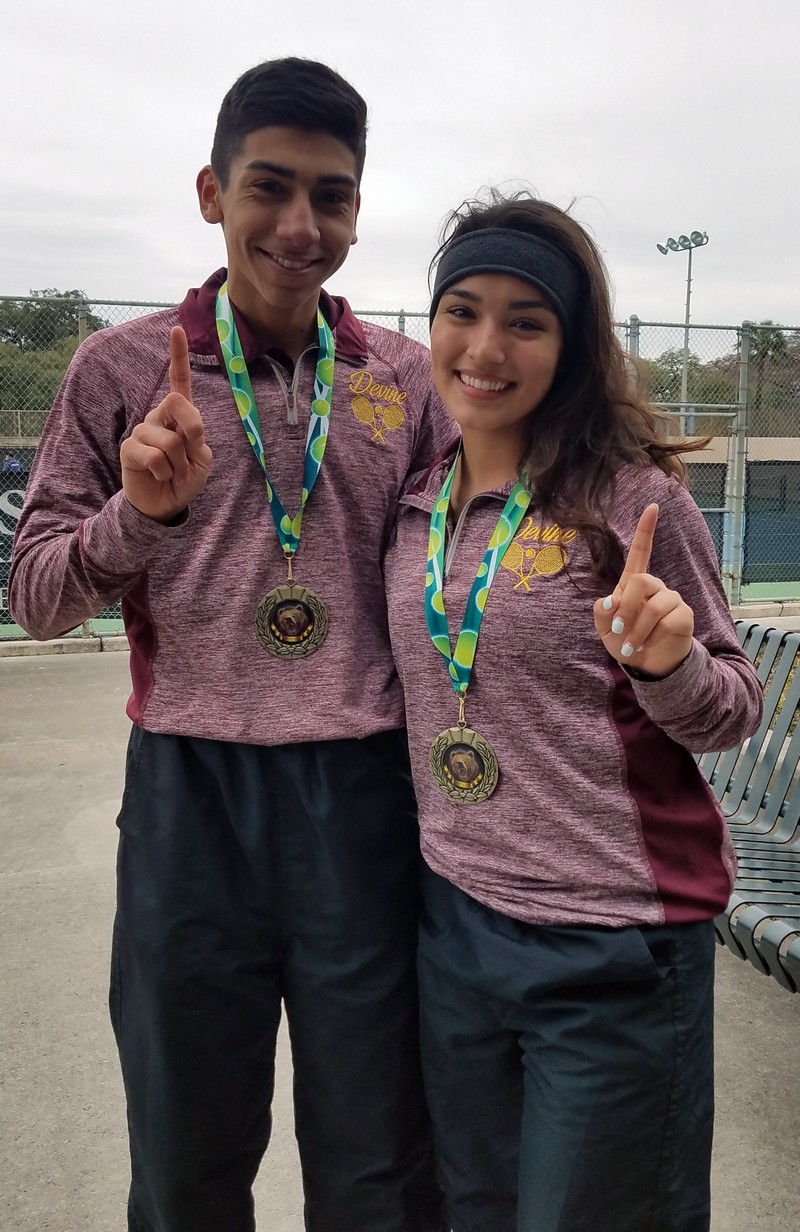 Edison Bears Tennis Invitational Tournament- Devine Warhorses and Arabians missed the Tournament Championship by just one point shy of Judson Rockets at the Edison Bears Tennis Tournament held at McFarlin Tennis Complex and the Fairchild Recreation Center in San Antonio. Athletes were playing in very frigid conditions with the wind chill of 28 degrees. It even began to sleet at one point, causing a delay in play and the courts at Fairchild to become too wet and unsafe. The Mixed Doubles draws returned to the McFarlin Courts to finish the tournament with the rest of their teammates. It was a great day on the courts, with three medalists and many others advancing to the semi-finals round of their brackets.
Warhorse and Arabian Duo, Toby Ramos and Scarlett Smith took 1st place in the Mixed Doubles draw. They won two quick matches only losing 4 games in 4 sets. This advanced them to the semi-finals against a salty Corpus Christi Miller duo, Vaduyn/Rojas. Toby & Scarlett lost the first set in a tie breaker of 6-8 which was interrupted by sleet and a change of locations in the middle of the tie breaker. The second set proved to be an easy one winning 6-1. Devine proved to be mentally tougher beating CC Miller 10-7 in a tie breaker for the match. Final score: 6-7(6-8), 6-1, 10-6 tie breaker. Mixed Doubles team Aidan Hildenbrand and Caitlyn Breiten lost their first match to Canyon so they were placed in the Consolation bracket where they beat a team from Judson, 9-7, then lost a tough one to Edison in the consolation championship match 2-8.
Arabian Brooke Runyan won 2nd place. She “met her match” against a very skilled Incarnate Word HS singles, Elina Osherow. Brooke played her hardest but came up short losing to Osherow with the score of 3-6, 0-6 in the finals match. Throughout the tournament, Brooke only lost 5 games, beating girls from Edison, Marshall and Incarnate Word. JoJo Villanueva lost her first match to F. Garcia of Corpus Christi Miller, 2-6, 4-6; then lost to Roosevelt 5-8 in the next match. JoJo has just finished her basketball season and did well with just one week of practice.
Warhorses Jake Harrell and Ralph Rios both played well in the Boys Singles draws. Jake won 2 matches only losing 3 games until he played Judson’s Jaime Nieto in the semi-finals. Nieto is an extremely skilled foreign exchange student from Spain that ended up winning the tournament. Jake played some great points but lost to Nieto, 0-6, 1-6. Ralph Rios made his way to the semi-finals as well, winning 2 hard fought matches, beating Seguin 6-3, 6-4, and Lockhart’s L. Hernandez in an exciting tie breaker for the match 4-6, 7-5, (10-5). Roosevelt’s Andres Gallardo beat Ralph in the semi’s 0-6, 3-6.
Warhorse Doubles team Caeden Alvarez/Mason Zenon had a very tough bracket, losing to Roosevelt’s duo, DeLaTorre/Acuna the first round. This put them in the consolation bracket where they won 3 more matches to advance them into the finals against Jourdanton. Unfortunately, they lost the final match 2-8. Warhorses Jacob Barron/Denton Zuercher got a lucky break in the draw which gave them a bye the first round. They were able to beat Judson 6-2, 7-6 (8-6) before losing to a talented Roosevelt team, Castillo/Rodriguez. Barron/Zuercher lost the semi-final match 0-6, 1-6. Roosevelt went on to win the Boys Doubles bracket.
Arabians Doubles team Laurel Spannagel/Malvin Flores played well, getting a bye in the first round, then beating Canyon 6-1, 6-0 before losing a super tie-breaker to a very talented Judson team in the quarter finals, 0-6, 6-1, (8-10). Arabians Madi Mohr/Amy Bailey beat teams from Fox Tech and Lockhart advancing them to the semi-finals. Devine split sets with McCollough HS 6-2, 4-6, but fell short losing the tie breaker 6-10.