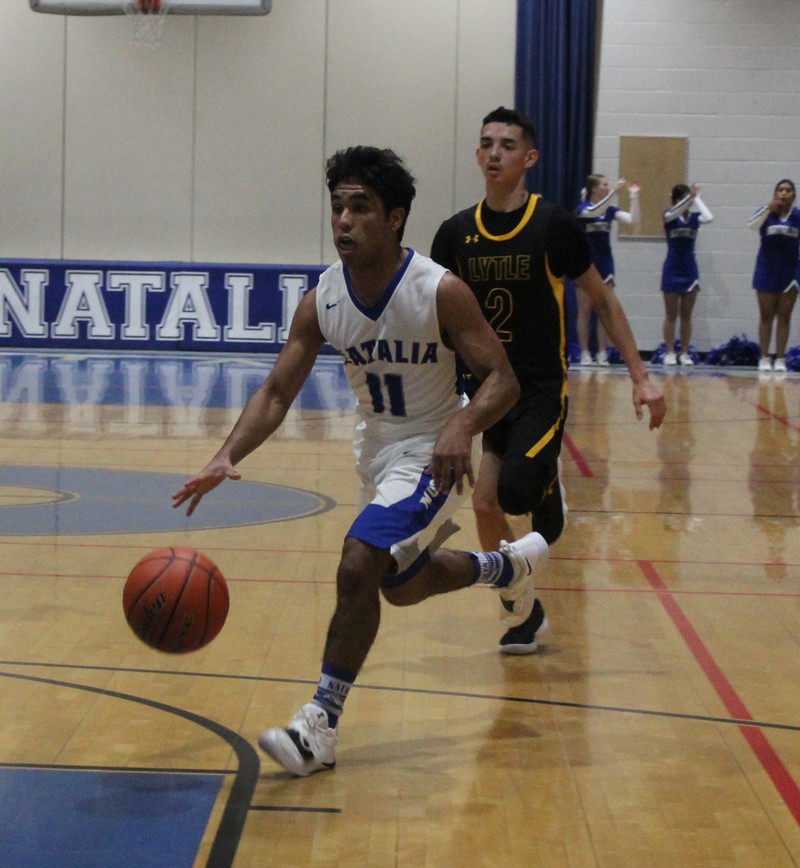 The Natalia Mustangs were able to find positive momentum, as all of their hard work and energy seemed to finally pay off with a home victory last week versus the Dilley Grey Wolves. Natalia used a big effort down the stretch by Dan Ramirez and others, to fuel the Stangs to a 43-40 victory revenging from a tough first round loss to the boys from Frio County.
“I was proud of the way we came out and played and I am happy for our boys who have worked so hard this season,” Coach Justin Welsh said.
Dilley was without a few starters due to an unknown suspension, but regardless still had plenty of players on the court to battle the Stangs. Dilley was able to edge Natalia 10-9 in the opening quarter, as Xavier Vasquez led scoring for Natalia scoring seven of the nine.
In the second quarter, Dilley remained to have the upper-hand, as they outscored the Stangs 12-9. All nine of the points for Natalia were accounted for by Juelian Armendariz in the quarter. Dilley took a 22-18 lead into the half.
The Stangs had a big third quarter on both ends of the court, as they played great defense holding Dilley to just four points. Offensively, Ramirez, Matt Contreras and Jared Stallworth combined for an eleven point effort, which allowed the Stangs to take a 29-26 lead into the final quarter of play.
Ramirez came up big as did Fabian Ruiz, Enrique Martinez and Armendariz who combined for a fourteen point effort. Dilley also produced fourteen, but thanks to the big 3rd quarter, Natalia escaped with the 43-40 victory.
Scoring Leaders: Ramirez 12, Armendariz 9, Vasquez 7, Stallworth 4, Ruiz 4.
By Eric Smith