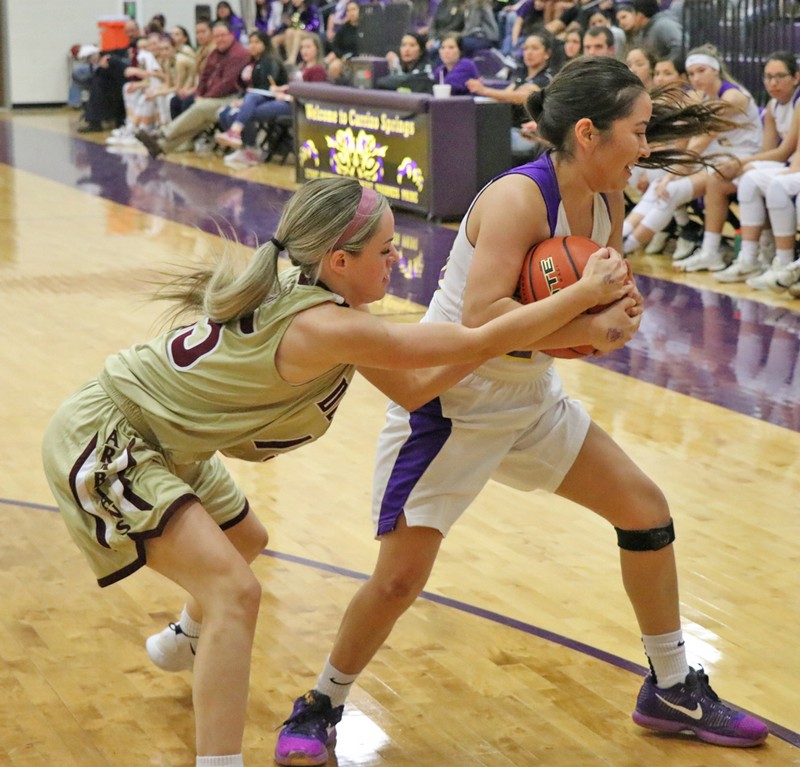 After a long tough season, the Arabians have won their last two games and are the undefeated District 29 4A Champions! Led by Coach Jim Sessions, this team of three seniors, three juniors, three sophomores, and a freshman have had an impressive 26-5 season.
In their final home game against Crystal City, the Arabians had to fight hard to come from behind in the first quarter for the win. Crystal City came out making their shots and were ahead 13-10 at the end of the first but the Arabians quickly found their rhythm and took the lead by the end of the half 25-24. Devine came out of the locker room strong and determined in the second half and controlled the pace of the game holding Crystal City to just 3 points in the third. The Arabians won 48-41 after a long fourth quarter.
“We had a tough shooting game, but we played well enough on the defensive end to limit CC in the second half. We did a good job of making free throws late to close out the game. The win clinched the district championship for us,” said Coach Sessions.
Maddie Mara scored 4 points, 2 rebounds, 1 assist, and 1 block. Ally Taylor 2 points, 3 rebounds, and 1 steal. Clarissa Zamora 4 rebounds. Megan Runyan 9 points and 12 rebounds. Preslee Quisenberry 15 points, 3 rebounds, 2 assists, and 2 steals. Macey Hein 4 points, 6 rebounds, 1 assist, 1 steal, and 1 block. Sierra Pompa 10 points, 6 rebounds, 1 assist, and 2 steals. Alissa Stehle 2 points, 4 rebounds, 1 steal, and 1 block. Scores by quarter: Q1 10-13, Q2 25-24, Q3 35-27, Q4 48-41.

In their final district game of the season, the Arabians took the lead against Pearsall early and never looked back. The Arabians had a 26 point lead at one point in the game. Devine started the game out shooting Pearsall 19-4 in the first and 18-14 in the second to end the half 37-18. Devine was outscored 15-17 in the third quarter but that was not enough to put a dent in their lead. The Arabians won the game 62-42.
“We got out to a nice start versus Pearsall. We did a good job of getting stops early and pushing the ball and scoring in early offense. I thought we played well on the offensive end, especially looking to get into the paint and create. We did a good job of maintaining the lead in the second half to come away with a win. It’s always nice to get a win in your last district game,” said Coach Sessions.
Stehle scored 9 points with 1 rebound. Hein 13 points 4 rebounds, 2 steals, and 1 block. Quisenberry 14 points, 1 rebound, 6 assists, and a block. Runyan 13 points and 7 rebounds. Gabby Rodriguez 1 steal. Clarissa Zamora 2 points, and 9 rebounds. Taylor 6 points, 2 rebounds, and 2 blocks. Mata 5 points, 6 rebounds and 3 assist.
The Arabians played Southside last night (February 5th) in a pre-play-off game.
When Coach Sessions was asked about play-offs he said, “We have been playing well as of late and the girls are excited about the playoff run starting soon. It could be a tough first round game versus Navarro but it is a game we are excited about and one that we are looking forward to playing.”
More information about the play-off game will be posted soon to the UIL website.
By Dicy Chambers
Sports Writer