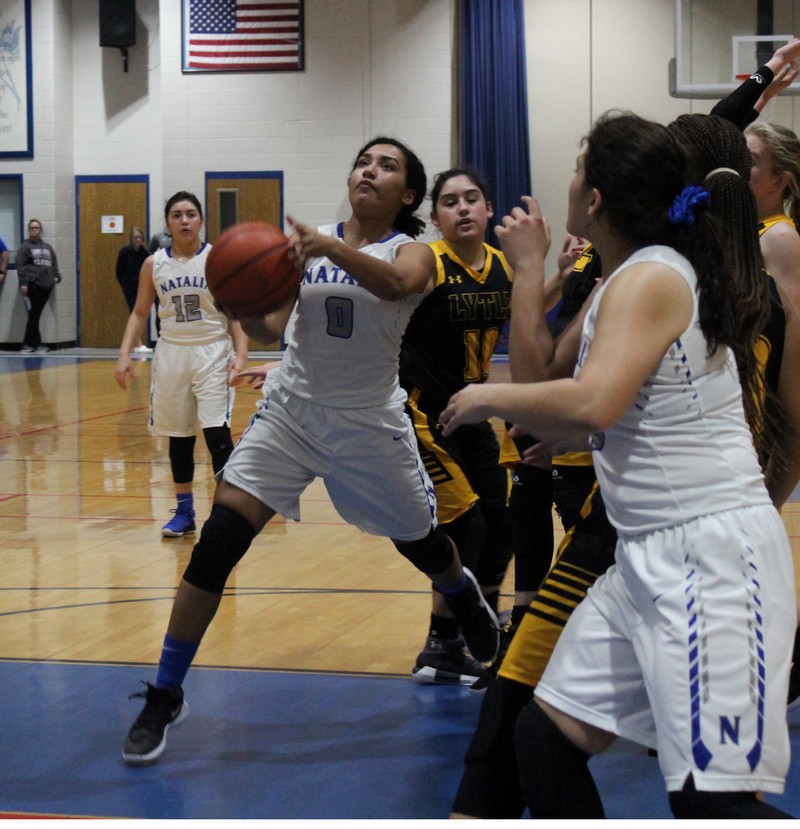 The Natalia Lady Mustangs picked up a big home victory on January 29th as they defeated 2nd seed Dilley by a score of 45-44. Angie Zapata came up big down the stretch scoring seven of her thirteen in the 4th quarter of action. This victory officially clinched a playoff spot for the girls in blue.
“This was a big win for us,” Coach Doug Lum said. “Our kids kept playing through adversity and were able to come out with the win.”
It was a neck and neck battle in the opening quarter, as the Lady Mustangs were able to edge Dilley 8-6 offensively. Zita Perez scored four of the eight for Natalia in the opening quarter.
In the second quarter, the game began to get more physical as free throws began to become important. There were a total of eighteen attempted in the quarter by both teams combined. For Natalia Perez continued to be a beast down-low, as she nailed three of six free throws and made a bucket, as Jelli Padilla, Raven Sanchez, Angie Zapata and Mariah Joseph chipped in efforts. Despite being edged 15-14 in the quarter, Natalia led 22-21 at the half.
Dilley found momentum coming out of the locker-room, as they outscored the Lady Mustangs 13-5 in the quarter. Zapata nailed a 3-pointer and the only other offensive production came from Katelyn Corona who hit two of four free throws. This allowed Dilley to take a 34-27 lead into the 4th.
A true team effort was key down the stretch for Natalia, as five players combined for an 18-point effort to fuel the Lady Stangs past Dilley 45-44. Sam Stallworth and Zapata nailed big 3-pointers in the quarter, as they led scoring in the quarter Zapata (7)/Stallworth (5).
“I am extremely proud of the effort and the way we all came together as a team to pull out the win,” Lum said.
Scoring Leaders: Zapata 13, Perez 10, Joseph 8, Padilla 6.
By Eric Smith