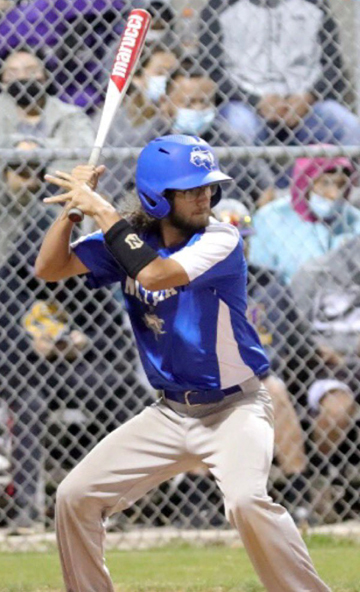 The Natalia Mustangs saw their baseball season come to an end last weekend in Kenedy. The Mustangs gave the Bulldogs all they could handle last Friday afternoon in game one falling in a 2-1 hard fought battle. The boys in blue then found themselves on the downside in a tough lop-sided game two loss later that evening as the 28-3A Champion Bulldogs advanced.
“I was extremely proud of the way these young men developed as baseball players and role models for our community,” Natalia Head Coach Kasey Crowther said. “As far as the Yoakum loss was concerned, we battled the 28-3A Champs as well as we could, but the team with the least errors came out ahead.”
Game 1
Natalia Mustang pitcher Manuel Garcia pitched his tail off during game one of the Bi-District battle. Garcia threw all 7.0 innings, allowed only four hits during the game and struck out six, giving up 0 earned runs during the contest.
Both teams played phenomenal defense during the warm afternoon battle, as they were scoreless for four complete innings.
Yoakum was able to start things off in the top of the 5th, as Smith got on thanks to an error allowing him to get on 2nd base after the connection to right field. C. Smith tripled allowing H. Smith to score, before the second Smith came across on a G-5 out by Koliba to give the Bulldogs a 2-0 lead.
Natalia responded with a run of their own. Joseph Blanquiz got on thanks to a base on balls. One error later followed by a Xavier Vasquez single and the Stangs were on the board.
Unfortunately, Natalia had one additional runner Chris Saldana, who was tagged out attempting to get home to tie the game in the same inning.
Natalia continued to make great defensive plays to finish the game, but never could produce an additional run.
As a result, Yoakum held on for the 2-1 victory.
At bat- Fabian Ruiz accounted for two of the hits for Natalia as Vasquez accounted for the third hit. Defensive Put-Outs: Jacob Navarro 6, Sonny Rymers 5, Blanquiz 3, Gavin Martinez 2, Vasquez 2, Wyatt Owens 1, Ruiz 1, Saldana 1. Assists- Garcia 1, Owens 1, Rymers 1.
Game 2
The Mustangs elected to go with Garcia (gave up 3 hits, walked one, struck out two and allowed four earned runs) during game two 30-minutes later and he started out strong before running out of gas understandably so. He was relieved by Joseph Blanquiz (pitched 3.0, allowed nine hits, walked two, struck out two and allowed seven runs) in the game, as the bats came alive for the Bulldogs.
During this game, Yoakum made up for their lack of offense in game one, as they belted out 12 hits and forced two additional errors on the Natalia defense.
Natalia did strike first in the game, scoring their lone run. Natalia’s Gavin Martinez started things off with a triple. He would score thanks to a Garcia ground-out. This would be the only run and one of only two hits in the contest both by Martinez.
Yoakum scored two runs in the 1st inning, four in the 2nd, two in the 4th and three in the 5th en route to an 11-1 victory over Natalia in 5-innings of play.
Yoakum was one of four 28-3A baseball teams to defeated 27-3A opponents during the weekend of action. Lytle lost to 4th seed Industrial, Poth fell to Hallettsville and Jourdanton fell to Columbus.
The Natalia Mustangs will say goodbye to a talented group of the following seniors: Wyatt Owens, Gavin Martinez, Jake Navarro and Fabian Ruiz.
By Eric Smith
Staff Writer