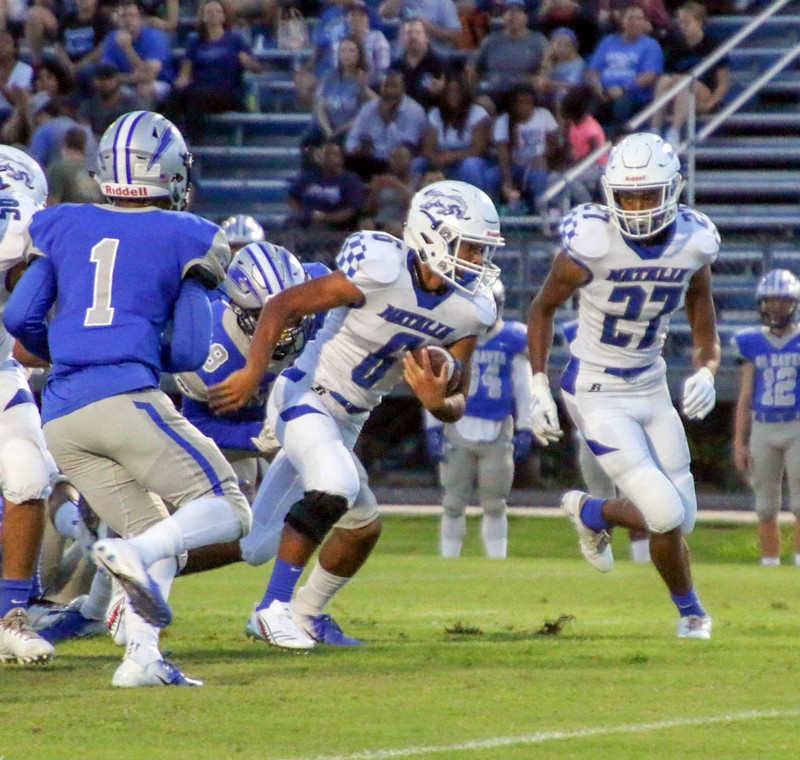 The Natalia Varsity Mustangs fell to 0-2 on the season in Universal City last Friday, as the Randolph Ro-Hawks pitched a 28-0 shut-out over the boys in blue. One thing the 28-0 box score doesn’t show, is the fact the Stangs had two prime opportunities in the opening quarter of play which could have resulted in possibly a different outcome due to momentum.
“We are disappointed in the outcome of the game,” Coach Ilyan Martinez said. “I thought our boys gave a great effort, we just didn’t play well enough consistently.”
The Natalia Mustang defense came out strong to start the contest, as they forced the Randolph squad to punt after running just three plays.
Natalia began their first drive of the game with great field position from their own 48 yard line. Natalia used a mixture of efforts with runs by RB Jared Stallworth, QB Wyatt Woodson and RB Jimmy Ray Gutierrez along with one pass to advance to the Randolph 17 yard line in 10 plays. On 4th and 4, an incomplete pass killed the drive giving the Ro-Hawks the football with 4:15 to go in the opening quarter.
The Natalia defense went back to work, as they forced a fumble on their 4th play on the series as Woodson recovered at the Randolph 43.
With prime field position once again, Natalia took over hoping to get something going offensively. Natalia used a mixture of pass and running plays to get to the Randolph 12 yard line as they were faced with a 4th and 8. Natalia attempted a field-goal, but unfortunately it was no good.
Things began to slowly unravel from here, as the Randolph Ro-Hawks took over offensively. They used 11 plays to drive 83 yards downfield before scoring on an Austin Bobick run. The PAT failed, but Randolph led 6-0 with 5:50 to go in the 2nd quarter.
Natalia began their third drive of the night at their own 28 yard line. Unfortunately, on the third play of the drive Randolph’s Xavier Oliphant intercepted a Woodson pass to give the Ro-Hawks prime field position.
Two plays later Randolph cashed in on a two play, 19 yard drive thanks to a Maximus Hill 12 yard touchdown run. This time, the PAT by Ben Rodriguez was good as Randolph extended their lead to 13-0 with 4:09 left in the 2nd quarter.
The Ro-Hawks used a few explosive plays to get down to the Natalia 26 just before the half. The Stangs came up with a big defensive effort, as Xavier Vasquez intercepted a Randolph pass killing the drive.
This is how the game would stand at the half, as Natalia struggled on their fourth and fifth possessions of the first half offensively.
In the second half, Natalia continued to struggle offensively, as they continued to use two different QB’s trying to find a spark. Throughout the night, both QBs were on the run as Randolph proved to be quicker up front and provided constant pressure.
A second interception, this time by QB Armendariz proved costly with Randolph’s first touchdown of the second half with 6:52 to go in the 3rd quarter. The two point try was good, as Randolph extended their lead to 21-0.
The Ro-Hawks added one final touchdown in the 3rd quarter with 2:01 to go, thanks to a 20 yard touchdown pass. This allowed the base squad to hand Natalia a tough 28-0 road loss.
“We watched the tape and know we have to get better in every aspect and that is what we intend to do this week as we prepare for a big game versus Lytle,” Martinez said.
Final Stats: Total Offense: Natalia 128, Randolph 350. # of plays: Natalia 51, Randolph 52. Passing: Natalia 8 yards, Randolph 46. Completions Passing: Natalia 3-11, Randolph 3-9. Rushing Yards: Natalia 120, Randolph 304. Turnovers: Natalia 3, Randolph 3. 1st Downs: Natalia 9, Randolph 20. Penalty Yards: Natalia 2-20, Randolph 7-50.
By Eric Smith