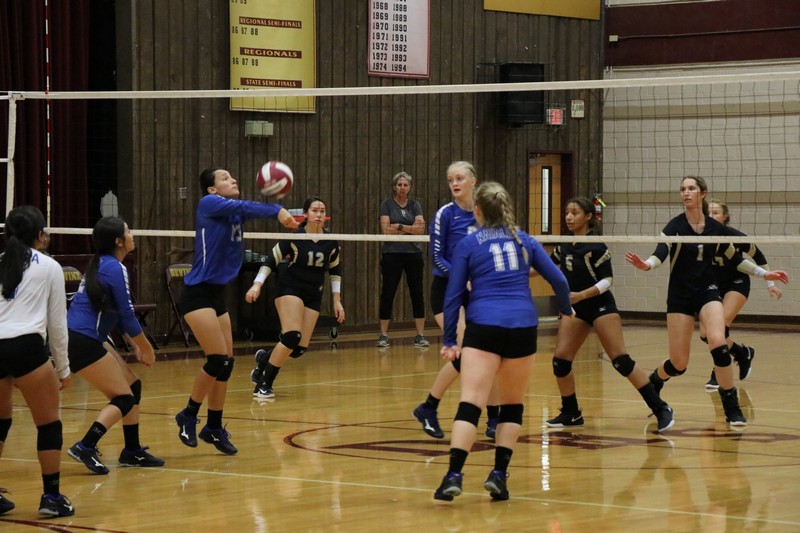 The Natalia Lady Mustangs overcame a lop-sided opening set loss to Carrizo Springs last Friday night and ended up forcing a five set competition. Unfortunately, small miscues in the fifth and final set resulted in a heart-breaking non-district loss.
“We have had some tough losses this pre-season, but we are confident in our preparation as we approach district play,” Coach Tamara Bednorz said.
Carrizo Springs opened the non-district battle with a lop-sided 25-14 victory over the girls in blue. Natalia responded well, as they picked up 25-22 and 26-24 wins over the Lady Cats.
Unfortunately, Carrizo was able to knock off the Lady Mustangs 25-21 and 15-8 to finish the win over the home squad.
Stat leaders: Aces- Perez 3, Corona and Sanchez 2 each. Kills- Masters 14, Vera 4, Boucher and Padilla 3 each. Assists- Boucher 16. Blocks- Masters 3. Digs- Perez 9.
Upcoming Games
Natalia was on the road on press night as they opened district play on the road in LaSalle County versus the Cotulla Cowgirls. This coming Saturday, September 15th Natalia will travel to Zavala County to face the Crystal City Lady Javs at noon.
Due to unique scheduling, Natalia returns to district play on Tuesday, September 18th as they host Cotulla again at 6:00 p.m.
By Eric Smith