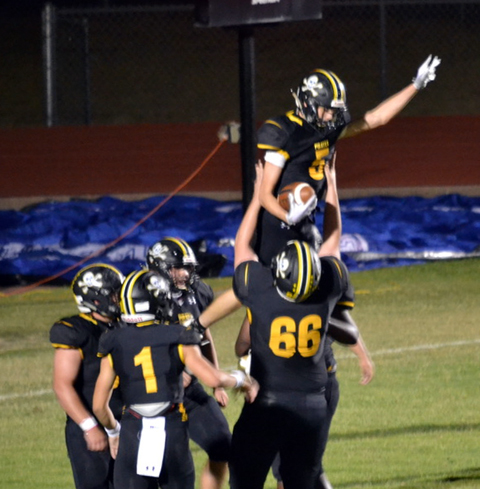 The Lytle Pirates hosed the 4-1 Randolph Rohawks Friday night in a game that went back and forth until Lytle stopped a 2-point PAT which would have won the game for Randolph.
Both teams traded possessions until late in the first quarter. Lytle survived a 51-yard run by the Rohawks that put them in Lytle territory. Once again, the Pirate defense rose to the challenge to stop Randolph at the Pirate 31-yard line.
After the stoop the Pirate offense started driving. First, a 35-yard pass from Carson Aldrige to Logan Wilson was completed. After a 10-yard holding penalty, Aldrige threw a perfect pass between two Ro-Hawk defenders to Wilson for a 26-yard touchdown. The PAT was blocked leaving the score Lytle 6, Randolph 0 with 1:58 remaining in the first quarter. The first quarter ended without any further scoring by either team.
In the second quarter, Randolph scored their first touchdown on a 35-yard run. The PAT was good giving Randolph the lead 7-6 at the 10:29 mark of the second quarter. Lytle was stopped on their next possession and punted to the Ro-Hawks. Randolph drove deep into Pirate territory before the Pirates rose up again and stopped the drive on a great tackle by Mark Cantu.
On the Pirates next possession, the drive was stalled and they were forced to punt. The Ro-Hawk punt returner muffed the Lytle punt and Pirate Kasen Boyd recovered the ball on the Randolph 28-yard line
Lytle tried a trick play that failed when the pass was intercepted. The Ro-Hawks took over and threw a last ditch “hail Mary” pass that was intercepted on the Pirate one-yard line by Logan Wilson to end the first half with Randolph leading 7-6.
Fans were treated to a wonderful half-time performance by both school’s bands. The highlight of the royalty night ceremony was Pirate quarterback, Carson Aldrige and fellow senior classmate, Clarissa Ybarra crowned as Royalty night King and Queen.
Lytle started the third quarter at their 25-yard line and drove to the Ro-Hawk 18-yard line until they lost the ball on a fumble. The Pirate defense again stopped the Ro-Hawks on the Lytle 38-yard line. The third quarter was scoreless and the score remained Randolph 7-6 over Lytle.
In the fourth quarter, the game got very interesting. Lytle was forced to punt at the 10:17 mark. A personal foul against the Pirates gave the Ro-Hawks good field position. The Ro-Hawks took advantage of the penalty and scored on a 40-yard run with 8:47 remaining in the game. The PAT was good bringing the score to 14-5, Randolph.

When all seemed lost, the Pirate offense got going. The Pirate offensive line played their best series creating large holes in the Randolph defense. First, a 33-yard run by Malakai Castro followed by a 20-yard run by Daniel Aguirre was a result of the excellent blocking of the Pirate offensive line. Then, a 5-yard run by Mark Cantu followed by a 4-yard run by Castro put the Pirates in great position. Castro followed the lead block of Vincent Casanova to score on a one-yard run bringing the score to Ro-Hawks 14, Pirate 12. Lytle had to go for a 2-point PAT to tie. Carson Aldrige rolled out right and just got into the end zone for 2-points to tie the game.
On the next Ro-Hawk possession the Pirates held and forced a punt. Pirate Bubba Solis tackled the punter before he could punt the ball giving the Pirates a 1st & 10 on the Randolph 28-yard line. A holding penalty and tough Ro-Hawk defense stopped the Lytle drive on the 25-yard line. Randolph took over with 1:35 remaining in regulation. The Pirates stopped the Ro-Hawk drive to force overtime.
Now the game got really exciting. Lytle started first on the Randolph 25-yard line. Runs of 4 and 7 yards gave Lytle a first down on the 14-yard line. A 6-yard run by Cantu followed by a Castro 2-yard run and finally a 4-yard run by Cantu gave Lytle a 1st and goal at the 5-yard line. A strong 5-yard run by Cantu gave Lytle the lead at 20-14. The important PAT kick by Daniel Aguirre was good bringing the score to 21-14 in favor of Lytle.
Randolph started on the Pirate 25-yard line. The Ro-Hawks scored in four plays bringing the score to 21-20. Randolph sent their kicker in to tie the score, but then called a time-out. When play resumed the Ro-Hawks decided to try for 2 points to win the game.
The crowd was on their feet. Randolph handed the ball to a running back moving behind blockers. Then, out of nowhere, #55 Jonathon Cantu charged into the Ro-Hawk back field to tackle the runner for a loss ending the game in a 21-20 Pirate victory!
This game was a team effort by the Pirate offense, defense and special teams. Carson Aldrige was the leading passer. Logan Wilson led the pass receivers. Strong running by Malakai Castro and Mark Cantu was recorded throughout the game.
On defense the leading tacklers were Rylan Wagner, Bubba Solis, Albert Aguilar and Santiago Garcia. The biggest defensive play was by Jonathon Cantu to preserve the 21-20 win.
The Pirates will travel to Cotulla for an important game. I would say “see you Pirate fans there”, however, Cotulla will not be allowing visiting fans to attend.
By Bill Herring