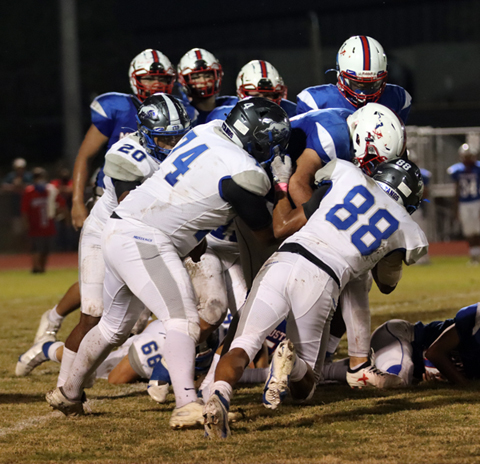 The Natalia Mustangs overcame a unique week filled with slight adversity to come together last Friday night in Gonzales County and showcase a big 43-21 road victory over the Nixon-Smiley Mustangs. Although the road win did not secure a playoff spot officially, it definitely put the blue and white Mustangs (5-2, 3-1) in great shape after seven weeks of action on the field.
“I am very proud of how our kids competed,” Natalia Head Coach Ilyan Martinez said. “They show week in and week out just how resilient they are to things outside of their control and I could not be more proud of them.”
Senior Jake Navarro stepped in at QB for the Natalia Mustangs for the first time since playing the position his sophomore year on the Natalia JV and did not disappoint. The senior, was able to go 7-9-211-3TDs on the night and also rush 11-52 behind an offensive line who continues to impress week in and week out.
The Natalia Mustangs who had been without five starters for various on and off the field issues the last three weeks in a row were lined-up during this district battle missing a total of four starters, but that never phased the squad who was hungry and determined.
“I thought our entire team did a great job of stepping up wherever we needed them,” Martinez said. “I am very proud of how well our offensive line has also played this season.”
The Nixon-Smiley Mustangs showcase a very unique offensive game plan with the Triple-Option and at times last Friday, it proved to be troublesome. Nixon received the football to start the game, but five plays later they were forced to punt the football.
Natalia got the ball at their 25 yard line and they went to work. The first play of the game for the Mustang offense, QB Navarro found a true work-horse during this game, Adrian Vasquez, on a pass route that went 53 yards down to the Nixon-Smiley 22 yard line. One play later, Vasquez broke loose again and rushed in for the first of four touchdowns for the senior. The two-point pass from Navarro to DeOsio was no good, but Natalia led 6-0 with 8:51 to go in the opening quarter.
Nixon-Smiley got the ball back at their own 31 and put together a nine play drive that marched down field and scored on a Bradyn Martinez 3-yard touchdown. The PAT was good, as Nixon led for a short period of time 6-7 with 3:02 to go in the 1st quarter.
Natalia got the ball back at Nixon-Smiley 30 thanks to a big kickoff return by Elijah Banda for 54 yards. Natalia used seven plays which included runs by Banda, Navarro and A. Vasquez before watching the sophomore E. Banda run in from 1-yard out with 4 seconds to go in the opening quarter. The two point try was good, as A. Vasquez rushed in allowing Natalia to regain the lead 14-7.
The Natalia Mustang defense came alive on the ensuing drive by N-S, as Devin Perez was able to recover a fumble with 10:17 to go in the 2nd quarter on the third play of the drive by Nixon.
Natalia got the ball back and after a holding call against Natalia, Adrian Vasquez broke loose for a 45 yard touchdown run. The two point run by E. Banda was just short, but the Stangs had extended their lead to 20-7.

Late in the second quarter, the Mustangs offense stalled out and a tough punt allowed Nixon-Smiley to get prime field position at their 16 yard line. The red and blue Stangs took advantage, as they would score on a Martinez 2 yard run on the 6th play of the drive. The PAT was good, as the home squad was within a 20-14 game of Natalia and this is how the score would stand at the half.
In the second half, Natalia received and they picked up where they left off. On the second play of the opening drive, Navarro found his go-to man of the night, A. Vasquez who was able to make the catch and out-gun a heard of red and blue Stangs 74 yards down field for his third touchdown of the night. The two point try was good as QB Navarro bulled his way in allowing Natalia to take a 28-14 lead with 11:02 to go in the 2nd quarter.
Needing a big stop defensively, Nixon-Smiley found a way to stay in the game as they used seven plays to march 67 yards down field scoring on a 42 yard run by Martinez. The PAT was good and just like that, Nixon was back in the game down 28-21.
This is how the game would stand, until early in the 4th quarter. Natalia was able to get the ball back with 10:56 to go at their own 42 yard line after holding Nixon on a big defensive stand.
Natalia used runs by Banda, Navarro and Vasquez to set up a nice pass play from Navarro to the other Vasquez, Xavier, who raced 34 yards in for the Natalia touchdown. Navarro was able to run in a 2-point try again, as the Stangs extended their lead to 36-21.
The Mustang defense came up big one final time sacking QB Martinez on a 4th and 10 play with 2:42 to go in the game at the Natalia 40 yard line.
Knowing any district can come down to ties and points, the Stangs finished what they started. Natalia marched down field using five plays before scoring on a sweet cross route as Navarro found Vasquez for a 28 yard strike that funneled the Mustangs to victory following a PAT that was good by Manuel Garcia. This allowed Natalia to win their 3rd game in a row and their 5th of the season with a 43-21 road win.
Coach Martinez responses to questions: Thoughts on offensive line success this season: “They continue to grow as a unit and all the success we have starts up front with them,” Martinez said.
What challenged your defense vs. Nixon-Smiley? “Triple option is something we see once a year,” Martinez said. “With that being said, it took us a while to settle in and make stops. I thought our coaches and kids did a good job of adjusting.”
Your thoughts on the defense coming up with big stops when needed? “I think it says a lot about who our defense is becoming,” Martinez said. “They take a great deal of pride in what they do and they made stops when they needed to.”
Any other thoughts on the road win vs. Nixon-Smiley: “I am just really proud of the resiliency and pride our kids have shown up to this point,” Martinez said. “We know we aren’t where we want to be, but every day we get a little closer.”
Final Stats: Total Offense: Natalia 415, N-S 224. # of plays: Natalia 37, N-S 47. Passing: Natalia 211, N-S 62. Rushing: Natalia 204, N-S 62. Penalties: Natalia 7-31, N-S 6-50. 1st Downs: Natalia 15, N-S 12. 3rd down conversions: Natalia 3-8, N-S 3-11.
Individual Stats: Passing: Navarro 7-9-211-3TDs. Rushing: A. Vasquez 10-123-2TDs, Navarro 11-52, E. Banda 7-29-1TD. Receiving: A. Vasquez 4-156-2TDs, X. Vasquez 3-55-1TD.
Defensive Stat Leaders: Solo tackles: G. Garcia 7, G. Martinez 7, D. Soto 3, I. Rios 3, D. Perez 3, J. Navarro 3, M. Garcia 3; Assists: G. Garcia 8, M. Garcia 7, I. Rios 6, D. Soto 4, J. Navarro 3, D. Perez 1; Tackles for a loss: J. Navarro 4, G. Garcia 2; Sacks: J. Navarro 4, G. Garcia 2; Fumbles caused: A. Vasquez 1; Fumbles recovered: D. Perez 1.
Player of the Week: Natalia RB Adrian Vasquez was named the Express News Offensive Player of the week for his impressive performance and stats during the Natalia win over Nixon-Smiley. Devine’s Justin Contreras was named the Defensive Player of the Week for his performance vs. Carrizo Springs.
Upcoming Game
The Natalia Mustangs will NOT return to action until October 30th when they travel to Karnes City to battle the Badgers in district play. Natalia’s home battle on October 23rd vs. Poth has been re-scheduled to Friday, November 6th at home due to a confirmed COVID case in Natalia. The Natalia Varsity Football team is currently in a14 day quarantine out of an abundance of caution.
By Eric Smith
Staff Writer