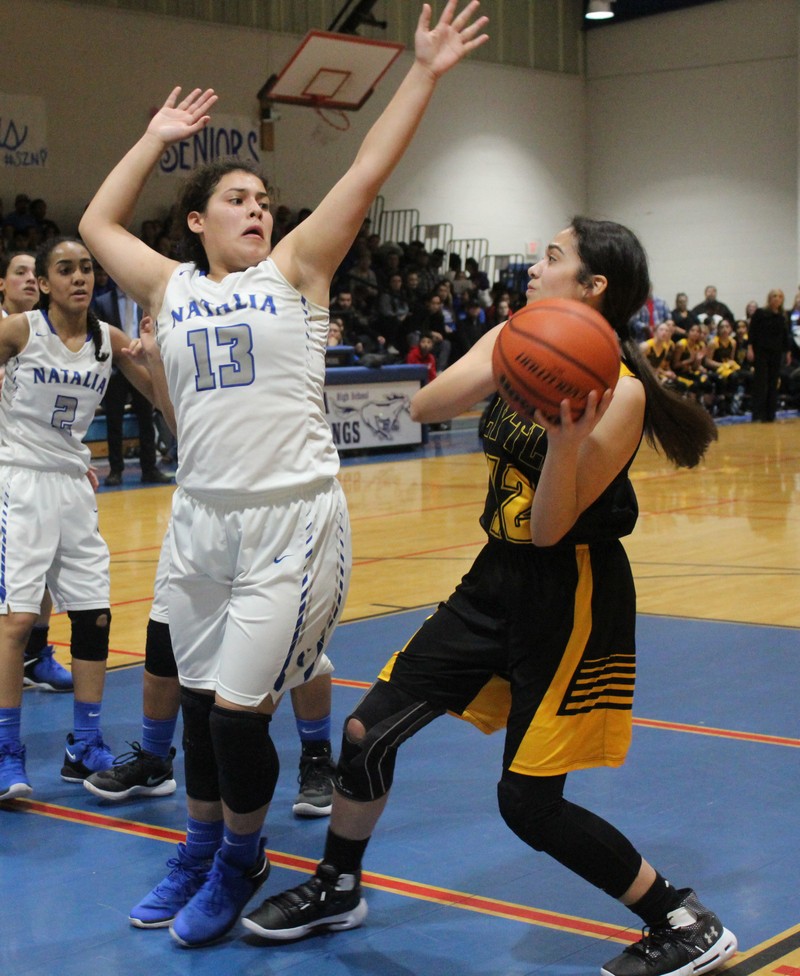 The Lytle Lady Pirates were able to complete a season sweep versus rival Natalia last Friday before a standing room only packed LHS Gym. Lytle was able to hold on in a low scoring defensive battle versus the Lady Mustangs for a 40-39 win.
“It was a great atmosphere and a hard fought game for both teams,” Coach Doug Lum said. “The crowds from both towns were outstanding as well.”
According to locals from Lytle, this was possibly the largest crowd they had ever seen in the LHS Gym last Friday evening which witnessed the back and forth battle.
“This game had the biggest crowd and atmosphere I have ever coached in,” Lytle Head Coach Lori Wilson said. “This game was like a playoff game and both teams showed great class and heart.”
In the opening quarter, the Lady Pirates used a 13 point quarter to hold a 13-12 lead over Natalia after one. Leading the offense for the black and gold was Nixon, who scored four of the thirteen. For Natalia, Jelli Padilla scored five of the twelve points.
Lytle had another productive second quarter offensively, as Adriana Rios, Cassidy Nixon and Eleni Keith combined for an eleven points.
On the opposite end of the court, Lytle limited Natalia to just three baskets made. Sam Stallworth nailed a 3-pointer, as Raven Sanchez and Zita Perez accounted for buckets. This resulted in Lytle taking a 24-16 lead into the half.
In the second half, both teams continued to compete at a high level, but didn’t have a ton of luck finding the basket. Lytle edged Natalia 10-8 in scoring as Rios led the quarter for Lytle with five and Perez led Natalia with four points. This allowed the black and gold to take a 34-24 lead into the final quarter of play.
Natalia rallied back in the 4th quarter, outscoring Lytle 12-2. Padilla and Perez had huge efforts, as they combined scoring all twelve of the points forcing OT with the score tied 36-36.
In OT, Keith and Nixon accounted for buckets for Lytle, as Angie Zapata scored the only three points for Natalia. As a result, Lytle was able to hold on for a 40-39 victory.
“We just couldn’t convert enough of our easy opportunities into points and get the job done,” Lum said. “I am very proud of how they have come together as a team and I am super excited we have made the playoffs and accomplished one of our goals.”
Scoring Leaders: Lytle- Rios 13, Nixon 12, Keith 7, Frias 3. Natalia- Perez 14, Padilla 12, Zapata 5, Mariah Joseph 3, Stallworth 3.
Playoff Outlook
The Natalia Lady Mustangs (16-14, 5-4) are playoff bound and they have a big game on press night versus district champion Jourdanton. A victory over Jourdanton could force a playoff with Dilley for seeding purposes. Dilley currently sits at 5-4 in district as does Lytle. Dilley and Lytle were scheduled to play on press night, but Lytle was forced to forfeit their game vs. Dilley due to an “over-scheduling of games” and the forfeit was forced by the UIL.
If Natalia fell to Jourdanton (9-0), they will head to the playoffs as the 4th seed in 30-3A and get District 29-3A Champion Skidmore-Tynan in the First Round of the Playoffs. Current standings in 29-3A look like this: Skidmore-Tynan (10-1), George West (9-2), Mathis (6-5), Odem (6-5), Aransas Padd (45-6), Goliad (3-9) and Taft (0-11).
Current 30-3A standings are as follows: Jourdanton (9-0), Dilley (5-4), Lytle (5-4), Natalia (5-4), Cotulla (3-6) and Laredo Harmony (0-9).
Bi-District Playoffs for the Lady Mustangs will take place either February 11th or 12th at a site TBA.
By Eric Smith