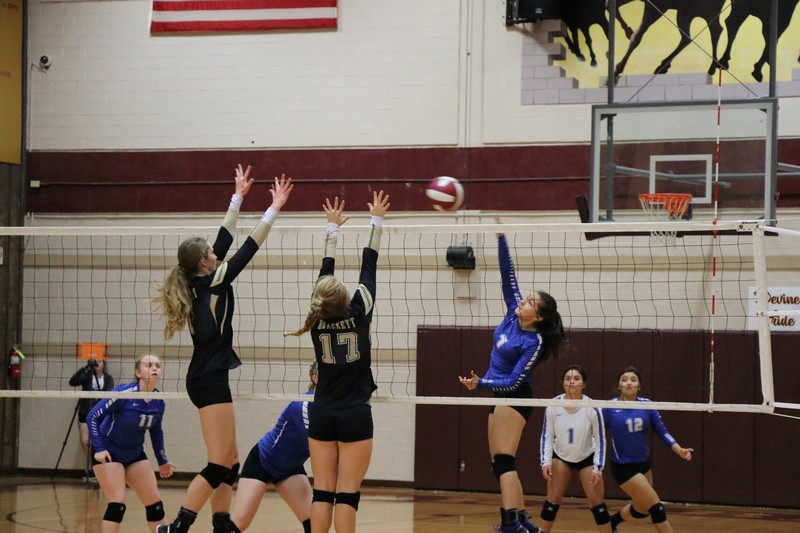 The Natalia Lady Mustangs struggled during their week of action, as they dropped their 30-3A opener in Cotulla before dropping a non-district battle in Zavala County. With the losses, Natalia falls to 8-20 (0-1) on the season.
“We are proud of the resiliency our girls are showing on the court as they are competing and putting up a fight each and every set,” Coach Tamara Bednorz said.
After dropping the opening set to Cotulla 13-25, the girls in blue turned the tables picking up a 25-21 victory in set two. Cotulla was able to finish with two straight wins (25-15, 25-18) to win the 30-3A opener on their home court.
Stat Leaders: Aces – Perez 3, Corona 1. Kills – Masters 8, Corona 6, Padilla and Vera 2 each. Assists – Boucher 15, Masters 3. Digs – Perez 7.
Natalia was originally scheduled to face Crystal City on the road last Friday, but due to Mother Nature this game was pushed to Saturday afternoon. Crystal City was able to take down Natalia in four sets, picking up the win by scores of 16-25, 26-24, 16-25, 18-25.
“Our team is happy with our progress, but we know we still have work to do,” Bednorz said. “We get back into district play Tuesday (press night) and we are prepared to control what we can control,” Bednorz said.
Stat Leaders: Aces – Perez 3, Sanchez 2. Kills – Masters 15, Boucher 7, Perez 5. Assists – Boucher 4, Masters 2. Digs – Perez 12, Zapata and Masters 4. Blocks – Masters and Leija 1 each.
Upcoming Games
The Lady Mustangs were at home on press night as they hosted Cotulla in district play. This coming Friday, September 21st Natalia travels to Atascosa County to battle the Jourdanton Squaws at 5:00 p.m.
On Tuesday, September 25th Laredo Harmony Science Academy comes to town for the first ever meeting between the two schools in a 30-3A battle set to begin at 5:00 p.m.
By Eric Smith