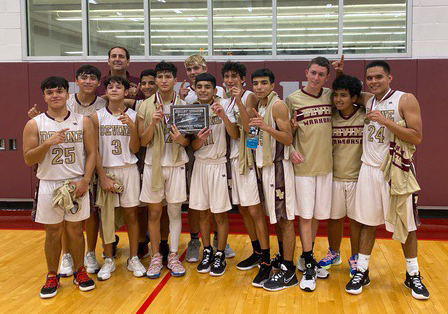 The JV Warhorses made sure to win their first tournament this season. After beating Natalia and Cotulla, the JV faced Dilley for the third time this season in the championship game. Winning 34-22, Devine brought home their first trophy of the season. Jordan Roberts, Rylan Mata, and Jacob Antu were also awarded All- Tournament!
Now 10-2 for the season, the JV look forward to facing Hondo on December 7th and competing in the Navarro tournament this weekend.
In their first game against Natalia, Devine was down 10-11 at the end of the first but quickly gained the lead. “The boys played hard all game but really picked up the defensive effort in the second half allowing only 7 points in the third quarter and 2 points in the fourth. While scoring 11 and 12 respectively and winning 48-32,” added Coach Gary Schmidt.
Kris Aguirre had 3 points, Elijah Contreras 4, Jordon Roberts 13, Juan Billalobos 2, Rylan Mata 11, Carson Esquibel 3, Jacob Antu 6, and Ruger Cote 6 points.
Beating Cotulla 48-22, the JV worked hard to keep them away from the basket. “The boys kept up the defensive pressure from game one by not allowing Cotulla to score any in the first quarter and only 8 points in the first half. The team ended the game playing excellent defense allowing only 4 points in the fourth quarter to secure the win,” said Coach Schmidt.
Wero Torres 2 points, Roberts 8, Billalobos 6, Mata 6, Carson Suhr 4, Esquibel 4, Trinidad Hernandez 1, Antu 4, Cote 11, and Antonio Gamboa 2 points.
In the championship game, Devine knew it would be a tough match with Dilley. “The JV Warhorses did a great job with poise and composure scoring when needed and protecting the ball and valuing processions. The JV’s defense was up to the task again not allowing Dilley to score double digits in any quarter,” said Coach Schmidt.
Torres had 2 points, Roberts 2, Billalobos 4, Mata 13, Suhr 3, Esquibel 2, Antu 4, cote 2, and Gamboa 2 points.
“I am very proud of how hard the boys worked and how they worked as a team. We are making progress growing and getting better with each and every practice,” added Coach Schmidt.
By Dicy Chambers
Sports Writer