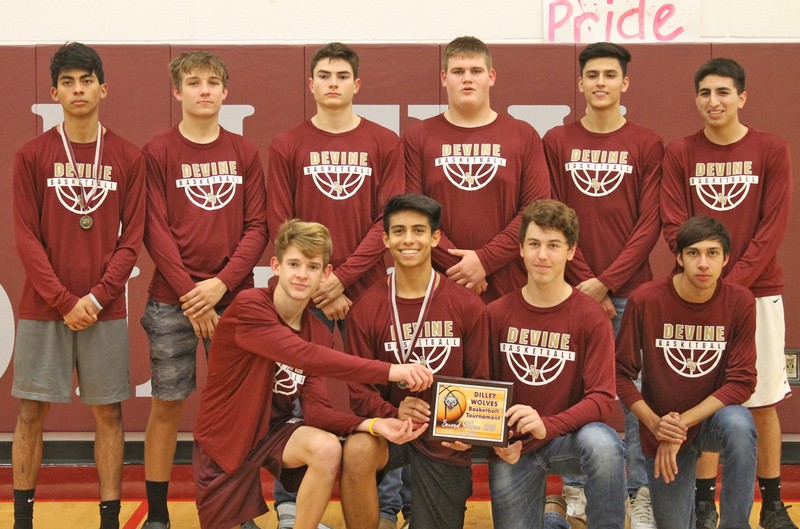 Winning second place in the Dilley tournament, last weekend, the JV Warhorses had three great games with two of the three games coming down to the wire. Coach Evan Eads and his team had a great weekend playing against some tough opponents.
Crystal City was the first team faced and it came down to a three point shot from Jose Dozal that won the game in the last two seconds. The Warhorses trailed 9-13 at the half and had to work hard to come back from behind. They lead 22-18 at the end of the third and it was back and forth until the very end. “First game of the tournament went great on defense but we struggled to score. The post players had good games defensively,” said Coach Eads.
Matthew Madrid led with 15 points, Dozal 13, Colin Dishman 3, Hunter Farias 2, and John Schnautz 1 point. Scores by quarter: Q1 4-5, Q2 9-13, Q3 22-13, Q4 34-32.
“The second day of the tournament was against Dilley’s freshman, so the score looks bad. I think Dilley’s Freshman showed a lot of class by giving max effort the entire game,” said Coach Eads. The JV Warhorses ran their game and didn’t let the inexperience of Dilley weaken their determination.
Scoring for the JV team were Dozal 24, Madrid 11, Weston Byrd 6, Trace Seguin 4, and Dishman, Farias, Sage Ornelas, Ryan Applewhite, and Schnautz each with 2.
Hondo is always an aggressive team and in this tournament it was no different. Hondo gained the lead early in the first 13-21 and the Warhorses came back to 25-26 by the half. Hondo stayed a few points ahead and won by just one point at 42-43. “The championship game was against Hondo. We played good defense at times but always allowed second chance points and open shots at bad times. We went cold from the 3 point line and free throw line. We will face Hondo two more times and we will compete better,” stated Coach Eads.
Coming up for the JV Warhorses is another home tournament with Cotulla, Pearsall, Dilley, and Lytle. The Warhorses will play Thursday at 9:30 and 2:30 and on Saturday at 9:00 and 12:45.
By Dicy Chambers
Sports Writer