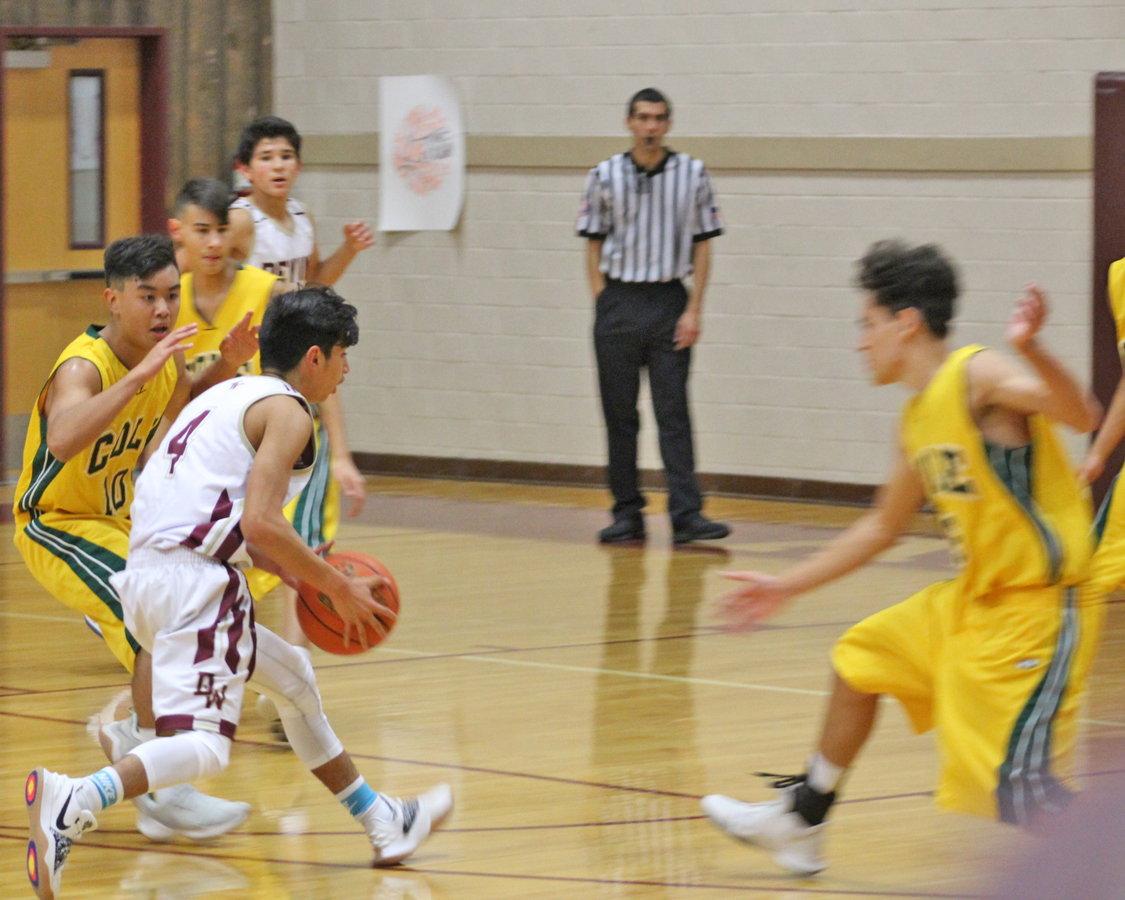 Facing the Brahmans on December 4th, the Freshman Arabians came away with the win. Led by Coach Quenton Sanders, the young Warhorses barely held the lead at the end of the first quarter 9-8 but Stockdale came back in the second to tie the game 16-16 at the half. The third quarter was when the Warhorses took control of the game and pulled ahead 33-22 and sealed the game 47-35.
Brian Schaefer led with 15 points, Xavier Contreras 11, Peyton Carr 10, Jacito Solis 7, and Robert Elizondo and Gabriel Hewtty each with 2.
The freshmen will host another tournament at home with Cotulla, Dilley, McMullen, and Pearsall competing. Devine will have games on Thursday at 9:30 and 1:15 and Saturday at 11:30 and 2:00.
Pleasanton Tournament
In a three day tournament in Pleasanton, the Freshman Warhorses went 2-1 against some very tough teams. Taking a full roster, Coach Quenton Sanders had many players step up when they were needed the most.
In their first match of the tournament, the Warhorses suffered their only loss to La Vernia 26-33. Devine led 12-8 at the half but the Bulldogs came out of the locker room ready to fight hard for the win. Scores by quarter: Q1 3-2, Q2 12-8, Q3 17-27, Q4 26-33.
Cody Trammel led with 9 points and was assisted by Peyton Carr 5, Robert Elizondo and Zack Rico with 3 each, Sage Cruz and Jacito Solis with 2 each, and Angel Espinoza 1.
In their second game, the Warhorses came out strong and aggressive against Cotulla taking the lead and holding it. Passing the ball around and running their plays opened up Cotulla’s defense. Scores by quarter: Q1 5-4, Q2 11-8, Q3 20-10, Q4 30-16.
Chris Oritz led with 8 points, followed by Carr 5, Trammel and Charles Waddley 4 each, Cruz 3, and Espinoza, Rico, and Solis with 2 each.
In the Consolation game against rival Hondo, the Warhorses came out with the win 44-21. Ten of the fourteen Warhorses scored this game after much passing and ball movement. Hondo could not keep up with their determination to win. Scores by quarter: Q1 6-5, Q2 17-7, Q3 34-14, Q4 44-21.
Scoring for the Warhorses was Brian Schaefer 8, Hayden DuBose 6, Contreras 5, Espinoza, Ortiz, Trammel, Rico, Carr and Solis with 4 each, Elizondo 1.
“What pleased me the most over the tournament is the amount of different kids that contributed to our success. One of the benefits of having a deep team is that you have different kids step up in key moments. Chris Ortiz had some very impactful minutes along with Zack Rico. These guys made the most of their time on the floor when it was their time to play. We always look forward to playing, and the chance to improve as a team,” said Coach Sanders.
By Dicy Chambers
Sports Writer