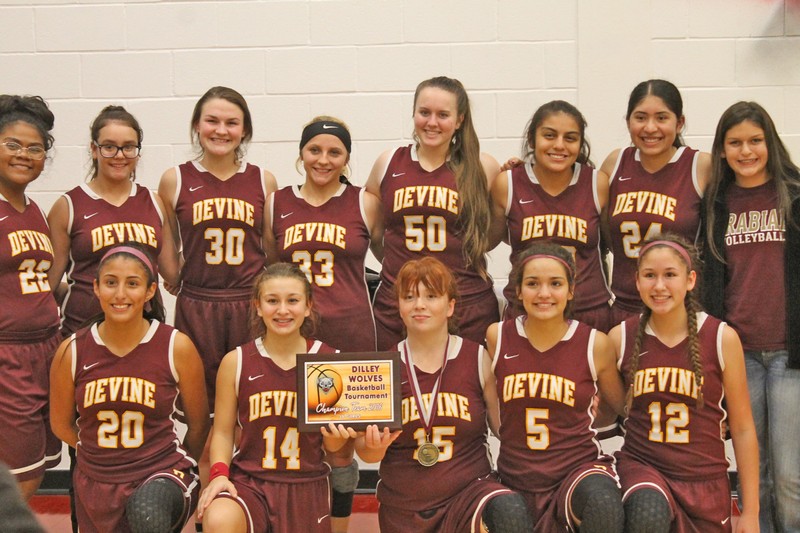 On November 27th the JV Arabians shut down Bandera in a 45-20 victory. Coach Hannah Thompson and her team came out of the locker room ready for a tough match up but quickly took control of the game with a 12-4 lead at the end of the first quarter.
The second quarter went just as well for the Arabians when they ended the half 24-9. Bandera was not able to score more than a handful of points in the third and fourth quarters and the game ended 45-20.
Alexa Garza scored nearly half the team’s points with 24 points herself, Mackenzie McClellen and Analea Brooks had 6 each, Brianna Boyer 4, Baleria Arana 3, and Janee Wofford and Jojo Villanueva 2 each.
Dilley Tournament
Playing in four games over the weekend, the JV Arabians beat every team they faced. Taking a team of 12 athletes, Coach Thompson had a lot of talent to chose from and she made sure every player saw the court. “The Dilley tournament showed the girls how to keep fighting and how to finish games strong. They keep improving every day in practice and in games as the season continues,” she said.
Alexa Garza was named tournament MVP!
Cotulla was their first game on Thursday December 6th, and the Cowgirls were not ready when the Arabians came out aggressive and ready to win. Holding Cotulla to just 3 points in the first half, the Arabians kept up the intensity and strong defense into the second half. The game ended 30-10.
Janee Wofford scored 9 points, Jessina Phillippe 6, Yesika Garzo 5, MacKenzie McClellen 3, Alexa Garza, Lacey Shook, and Kendall Mark 2 each, and Jojo Villenueva 1. Scores by quarter: Q1 10-3, Q2 14-3, Q3 23-6, Q4 30-10.
The Carrizo Springs JV was another great game for the Arabians. Carrizo Springs was a stronger team and the Arabians had to work harder for this win but they controlled the lead the whole game for the 33-21 win.
A. Garza and Wofford scored 8 points each, Phillippe 6, Shook 3, and McClellen, Analea Brooks, Baleria Arane, Mark, and Y. Garza with 2 each. Scores by quarter: Q1 9-6, Q2 18-7, Q3 25-14, Q4 33-21.
In their second day of games, they started against the ever tough Lady Eagles. The first half was a back and forth struggle for control. It was in the third quarter that Devine got their game together and out shot Pleasanton. The Lady Eagles closed the gap in the fourth but Devine was still the stronger team and came away with the win.
Wofford 9 points, A. Garza 8, Shook 6, Y. Garza 5, Brianna Bowyer 4, Katie Yeats 3, and Mark 2. Scores by quarter: Q1 7-6, Q2 16-15, Q3 32-19, Q4 28-33.
In their final game against the Carrizo Springs Freshman team, the JV Arabians had to work hard and not let the younger team take advantage of their exhaustion. Ending the half strong, 22-8, the Arabians were outshot 5-10 in the third as Carrizo attempted a comeback that continued into the fourth quarter. The Arabians stayed ahead and won 34-30 but they had to work hard for this win. With this win came First Place in the tournament!
The JV Arabians have Boerne on December 14th and Cotulla on December 18th before the winter break.
By Dicy Chambers
Sports Writer