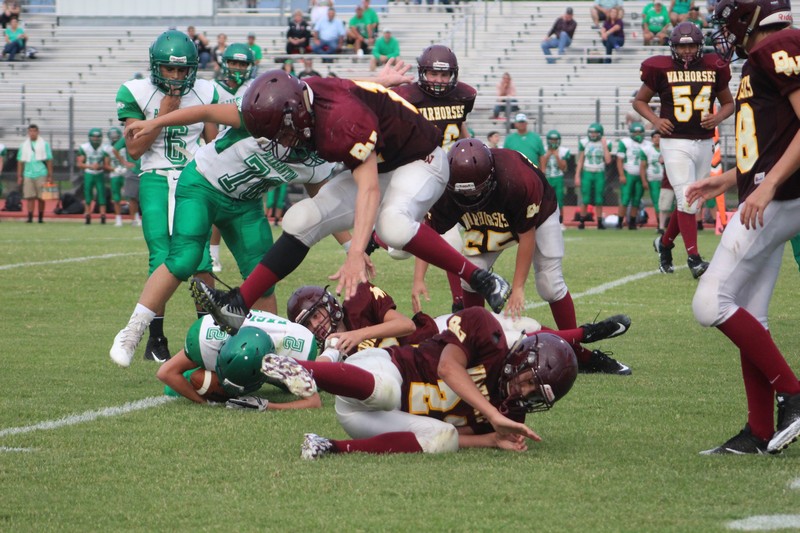 Click here for photos of the JV Warhorses’ win over Pleasanton!

Points aplenty at Warhorse Stadium last Thursday night as the JV Horses defeated the visiting Pleasanton Eagles in a high scoring affair 44-33. Quarterback Brady Hackebeil led the charge rushing for four touchdowns, scoring twice on two-point conversion runs, passing for another touchdown to Chris Ortiz, and finally, completing a pass to Michael Reichel for yet another two-point conversion.
“Our tailbacks Zack Nowicki and Xavier Contreras did an excellent job of running the football hard and picking up many rushing yards,” stated Coach Bart Oropeza. “Our offensive line really stepped it up by creating running lanes for all of our running backs.”
Devine took a 12-0 lead going into the second quarter. Hackebeil scored the first touchdown of the game on a 15-yard run. On the Horses next offensive possession, Xavier Contreras put his stamp on the game by running it in from the 2-yard line.
In the second quarter, Hackebeil sandwiched an incredible, multiple tackle-breaking 81-yard touchdown run, and a two-point conversion run by Payton Carr, in between two Pleasanton touchdowns. The score was tied at 20 apiece halfway through the contest.
Hunter Reyes’ 42-yard kickoff return to start the second half propelled the Horses to another Hackebeil 4th and 2 to go touchdown run to put Devine back on top. Michael Reichel hauled in the two-point pass from Hackebeil to make the score 28-20.
The Eagles scored a touchdown on their next possession to pull within 28-26 but failed to get the conversion attempt.
Chris Ortiz caught a Hackebeil pass for an 18-yard touchdown score. Hack ran in the two-point conversion to increase the lead to 10 points at 36-26.
Devine’s final six points came on a 30-yard Hackebeil run in the fourth quarter. Pleasanton returned the kickoff to close out the game’s scoring at 44-33.
“Defensively, Contreras played well in the secondary as did Hackebeil,” stated Coach Juan Gonzalez. “Brady caused a defensive turnover. The defensive end combination of Ortiz, Jared Fernandez, and Abraham Gallegos played good assignment football. A big play in the game for us was Ortiz executing a stunt and sacking their quarterback on a 3rd and long. Forcing Pleasanton to punt on that possession was an important momentum boost for us.”
Up next
The JV B plays in San Antonio against the Central Catholic Buttons on Thursday. Kickoff is set for 6:00pm.
By Jerel Beaty
Staff Writer