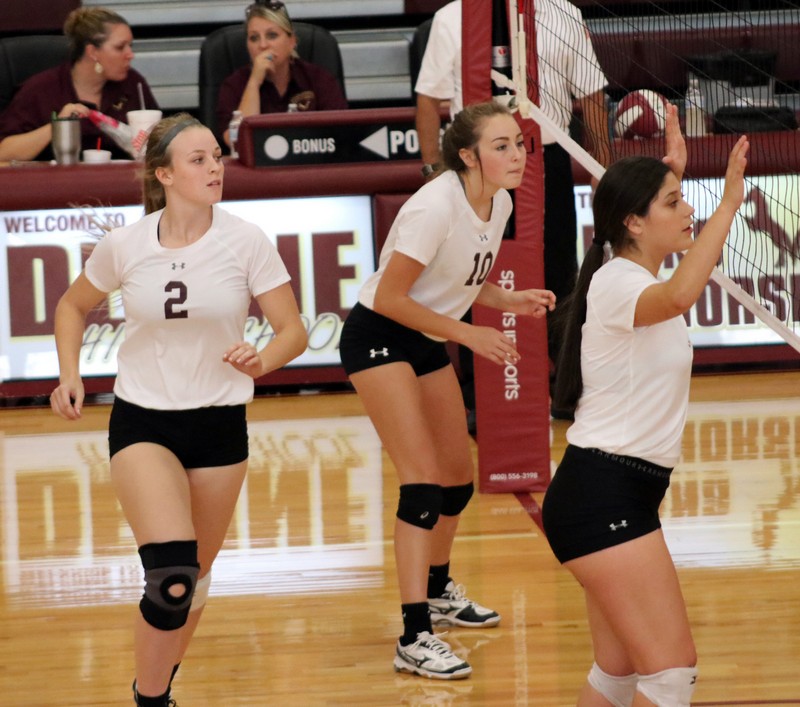 District play is off to a great start for the Junior Varsity Arabians with a win over Carrizo Springs. Winning in two sets, the Arabians may have started off slow but they quickly built energy and put pressure on the Lady Cats to win each set 25-19. “We came out a little sloppy and slow but after a few touches, the girls pulled through and gained momentum to take and maintain the lead. This was a great way to start off district!” said Coach Megan Perez.
Alyson Taylor led with 3 aces, assisted by Alison Stevens and Brooke DuBose with 2 each, and Janae Wofford, Destiny Moralez, and Heidi McLaughlin with 1 each. Sydnie Harrel led with 6 kills, assisted by Wofford 4, Taylor 2, Halle Hagdorn and Kennedy Duncan with 1 each. Harrel and Hagdorn each had 1 block.
The JV Arabian record is 5-7.
Cole
In their last game before district, the Junior Varsity Arabians beat Cole in two sets. Playing away from their home court, the JV Arabians made sure they controlled the Cougars’ court. The Arabians won big in their first set 25-9 and the Cougars tried to come back in the second but still lost 25-16.
“We did a much better job today on our offense, our serves and swings were more aggressive and it really showed the level we can play at. I am pleased as all aspects of our game are pulling together in time for district and now just need to keep constant intensity,” said Coach Megan Perez.
Destiny Moralez had an impressive 7 aces, assisted by Alyson Taylor with 3, Janae Wofford and Mila Miles with 2 each and Alison Stevens and Brooke DuBose with 1 each.  Sydnie Harrel led with 6 kills, assisted by Taylor 3, Kennedy Duncan, Wofford, and Halle Hagdorn with 1 each.
By Dicy Chambers
Sports Writer