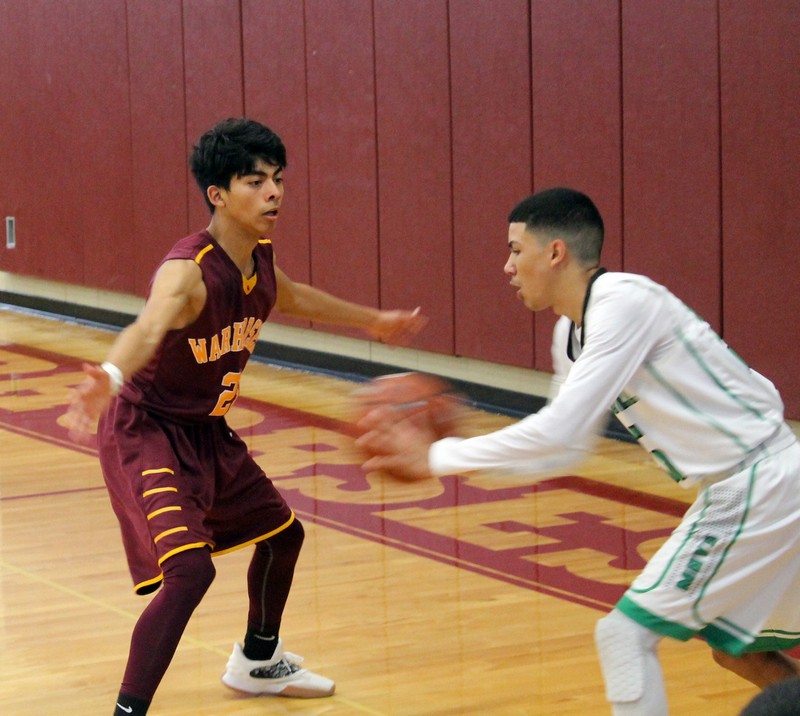 Click here for photos of the JV Warhorses vs Cotulla!

The JV Warhorses had a rough start to their district season with a loss to Crystal City. Down 3-23 at the end of the first quarter, the Warhorses had to fight an uphill battle the rest of the game. The third quarter was when the Warhorses took control of the game and started to the close the gap. They only allowed the Javelinas 1 point while they scored 17 to end the quarter 27-33. The game ended with Crystal City 2 points ahead after a great comeback attempt by the JV Warhorses. Scores by quarter: Q1 3-23, Q2 10-32, Q3 27-33, Q4 38-40.
“It was not the start we wanted to the game, being down 3-23, but we fought back and had a great 3rd quarter. We fought and made it a competitive game. We know how to win; we just need to do it for 32 minutes,” said Coach Eads.
Dozal 12 points, Madrid 7, Byrd 6, Gerlach 5, and Ryan Applewhite, Schnautz, and Xavier Contreras with 2 each.
The JV Warhorses are 9-11 overall and 0-1 in district.
Up next for the JV Warhorses is Hondo at home January 22 and then away in Carrizo Springs January 25.
Blanco, Cotulla, Fredericksburg
The JV Warhorses are in a rough spot after losing three games in a row against three very tough opponents. In their last three non-district games, the JV team played hard but could not get ahead at the end.
Facing Blanco on January 2nd, the JV team struggled to get their offense to work. They led 10-4 at the end of the first but lost that lead in the second at 19-22. Not giving up and continuing to fight their press the JV boys worked hard to keep up. “We lost the Blanco game 36-40. We had trouble handling the press and finishing shots,” said Coach Evan Eads.
Christian Gerlach led with 12 points, Colin Dishman 8, Jose Dozal 6, Weston Byrd 5, John Schnautz 3, and Trace Seguin 2. Scores by quarter: Q1 10-4 Q2 19-22, Q3 30-32, Q4 36-40.
In the match up against Cotulla, the Warhorses tied the Cowboys at the half and played a tight third quarter, but the Cowboys were able to pull away in the fourth and win 44-38. “We had trouble with Cotulla’s pressure. We could not find our shot. Our defense held them to less points than last time we played them,” stated Coach Eads.
Dishman led with 10 points, Dozal 8, Gerlach 5, Schnautz and Byrd with 4 each, Brian Schaefer 3, and Sage Ornelas and Seguin with 2 each. Scores by quarter: Q1 13-10, Q2 18-18, Q3 24-25, Q4 38-44.
In their last game before district, the JV Warhorses went up against the powerful Fredericksburg Billies and lost 23-78. “Our poorest showing of the year happened at the worst time. We ran up against a well skilled offense and an aggressive defense in Fredericksburg,” said Coach Eads.
Dozal and Contreras each had 4 points, while Hunter Farias, Byrd, Matthew Madrid 3, Gerlach, and Schnautz each had 3. Scores by quarter: Q1 0-25, Q2 11-47, Q3 17-64, Q4 23-78.
By Dicy Chambers
Sports Writer