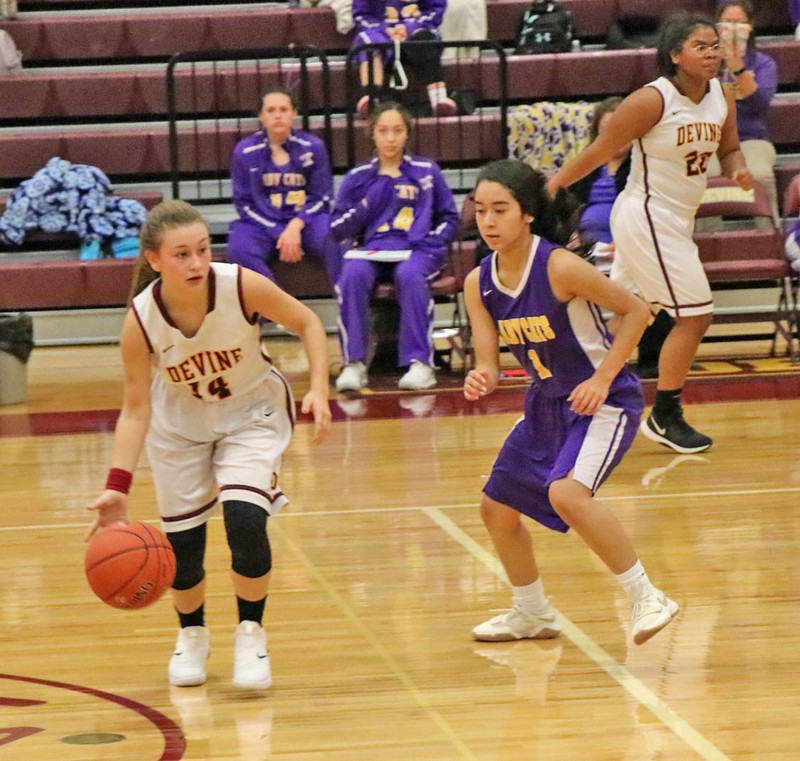 Click here for photos of the JV Arabians vs Hondo!

Facing Hondo in their first district game, the JV Arabians struggled to get their defense to work against the Owls aggression. Behind 2-10 at the end of the first, the second quarter was not much better offensively and the half ended 4-20. Hondo was able to score another 10 points in the third while Devine was able to add 7 to their score. The fourth quarter was Devine’s best quarter when they outscored Hondo 12-4 but it was too late in the game for a winning come back. The game ended 23-34.
Janee Wofford led with 10 points, Yessika Garza 4, Kendall Marke 3, and Brianna Bowyer, Analea Brooks and Lacey Shook 2 each.
Bracken Tournament Results
In the Bracken Christian Tournament last month, the JV Arabians won two of their three games. Coach Hannah Thompson and her team started their tournament play against San Marcos and it was a tight game until the very end. Tied at the end of the third quarter, the Arabians lost the game in the final moments at 34-37.
Mackenzie McClellen 10 points, Alexa Garza 7, Bowyer 3, Brooks 2, and Janee Wofford and Baleria Arana 1 each.
The JV’s second game was much more in their control when they faced La Vernia and won 46-37. Their offense was able to take control of the game early and hold on to their growing lead each quarter.
Garza scored 21, Wofford and Arana 7 each, Bowyer 4, and Jojo Villanueva and McClellen 2 each.
The final game of the tournament for the JV Arabians was a come from behind victory. The Arabians held the lead at the end of the first at 7-4 but lost that lead in the second when the half ended 12-18. Bracken continued to outshoot Devine in the third but the Arabians fought back in the final quarter to come from a 12-point hole to win the game by two points at 36-34. It was a great way to end the tournament.
Garza scored 17 points, Bowyer and Wofford 6 each, Arana 4, and Brooks 3.
By Dicy Chambers
Sports Writer