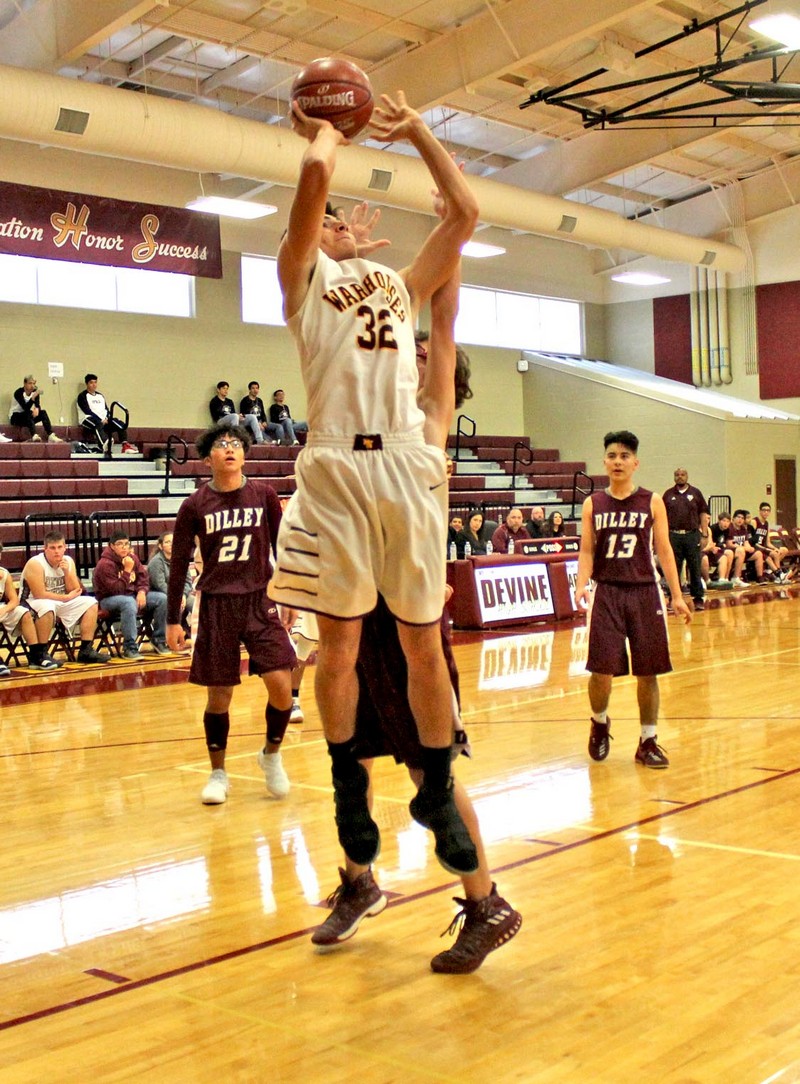 The JV Warhorses had a great victory against Navarro Tuesday, December 11th, at home. Navarro came out strong in the first leading 12-11 but the JV boys turned the game around in the second holding Navarro to just 5 points while scoring 13 themselves.
The strong defense continued into the third against a comeback attempt from Navarro. The Warhorses finished the game stronger than they started it with a 50-34 victory.
Jose Dozal 11, Weston Byrd 9, Colin Dishman 7, Hunter Farias 6,Matthew Madrid and Christian Gerlach each with 5, Sage Ornelaz 3 and John Schnautz 2. Scores by quarter: Q1 11-13, Q2 24-18, Q3 37-27, Q4 50-34.
Home Tournament
It was a tough weekend for the JV Warhorses in their home tournament. They beat Pearsall but fell to Lytle, Cotulla, and Dilley over the weekend.
In their opening game Thursday against Lytle, the JV came from behind to make the Pirates fight in the last few moments for the win at 60-61. The JV fought hard to come back and almost won it.
Dishman, Madrid and Dozal each had 10 points, John Schaefer 6, Gerlach 4, and Trace Seguin 2. Scores by quarter: Q1 15-19, Q2 26-33, Q3 44-47, Q4 60-61.
Cotulla was a tough second opponent and it was another tight game that could have been won by the Warhorses if their offense would have been up to their normal game. They lost 42-47 after making another late comeback attempt.
Dozal 19 points, Gerlach 9, Madrid 8, Seguin 4, and Ornelaz 2. Scores by quarter: Q1 5-9, Q2 16-28, Q3 26-38, Q4 42-47.
Opening against Pearsall Saturday morning, the Warhorses played a stronger game and won 45-26. They were aggressive when it came to offense and held Pearsall back from scoring with a defense that was more up to their standards.
Dozal 20 points, Farias 5, Dishman, Ryan Applewhite and Gerlach each with 4, Byrd 3, Schnautz 3, and Madrid 2. Scores by quarter: Q1 10-8, Q2 28-16, Q3 37-20, Q4 45-26.
In their final game against Dilley, the Warhorses again struggled to keep up. They continued to play hard and not let Dilley’s lead get in their head. In the end they lost 55-62 but they played with pride the whole game.
“We went 1-3 in our tournament. Our defense was below our normal intensity and intelligence. Our offense did not execute well enough when it mattered. We are not playing with enough confidence. Now that tournament season is over we can have more practices to work on our game and prepare for district. We will be ready,” said Coach Evan Eads.
Currently the JV Warhorses are 7-7 with one game left against Dilley before the holiday break. They will resume play on January 2nd against Blanco.
By Dicy Chambers
Sports Writer