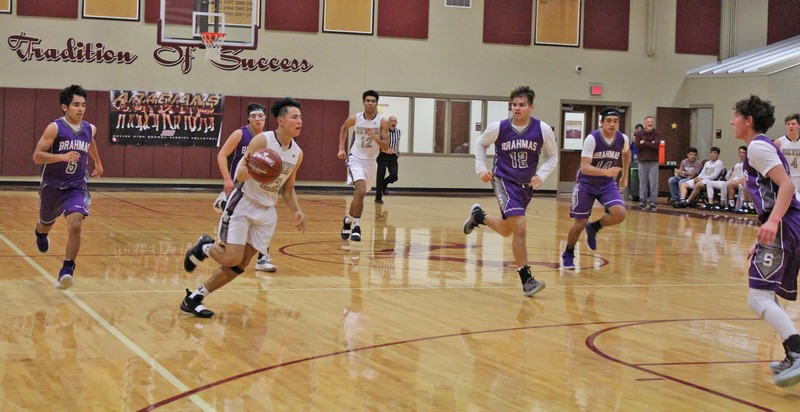 Navarro Panthers fell to the Warhorses on December 11th 60-43. It was an aggressive match up with the Warhorses at the line 26 times. Navarro fought hard but could not keep up with the Warhorses and they quickly fell behind on the scoreboard.
The slow first quarter ended 8-5, and the Warhorses were outshot in the second. They turned it around in the third quarter with an aggressive offense that outscored the Panthers 18-6. Unable to recover, the Panthers lost 43-60.
Cash Walker led with 26 points, followed by Brady Cardenas 11, Dalton Kramer 8, mason Burford 6, Leonard Pompa and Justin Contreras each with 3, Kam Adams and Sergio Martinez each with 2. Scored by quarter: Q1 8-5,Q2 20-25, Q3 38-31, Q4 60-43.
Pleasanton
It was a long two days of games for the Warhorses when they competed in the Pleasanton Varsity Tournament. Coach Paul Wells and his team went 2-2 against George West, Stockdale, Lytle, and Pleasanton.
Facing George West on Friday, the Warhorses made quick work of the Longhorns with a 58-45 victory. Defensively they played a strong game and the Longhorns could not get their shots made. Leonard Pompa had 13 points, Dalton Kramer 12, Kam Adams and Cash Walker with 8 each, Brady Cardenas 6, Justin Contreras 5, Sergio Martinez 4 and Damien Martinez 2. Scores by quarter: Q1 18-6, Q2 26-17, Q3 34-29, Q4 58-45.
Stockdale was able to keep up with Devine most of the game but still trailed at the end of each quarter. The Warhorses took the lead early in the first and fought hard to keep it. Walker 19 points, Kramer 11, Contreras and Cardenas each with 7, Pompa 6, Adams 4 and Burford 2. Scores by quarter: Q1 13-10, Q2 29-22, Q3 47-31, Q4 56-44.
Saturday was a rougher day for the Warhorses with back to back losses against Lytle and Pleasanton. The Lytle Pirates took advantage of the unawake Warhorses with a 19-6 lead but Devine woke up and closed that lead to two points by the end of the second. Lytle kept playing aggressively, and they pulled out the win in the end 75-69.
In their final game against Pleasanton, the Warhorses trailed 22-36 at the half and closed that gap in the third 41-42. The Eagles were able to outshoot the Warhorses in the end and the game ended 54-65.
It was still a great tournament for the Warhorses with a third place finish and learning to come back against a stronger team. Overall they made 64% of their free throws.
The Warhorses will play in Dilley Friday night and then will be on holiday break until January 2nd when they face Blanco.
By Dicy Chambers
Sports Writer