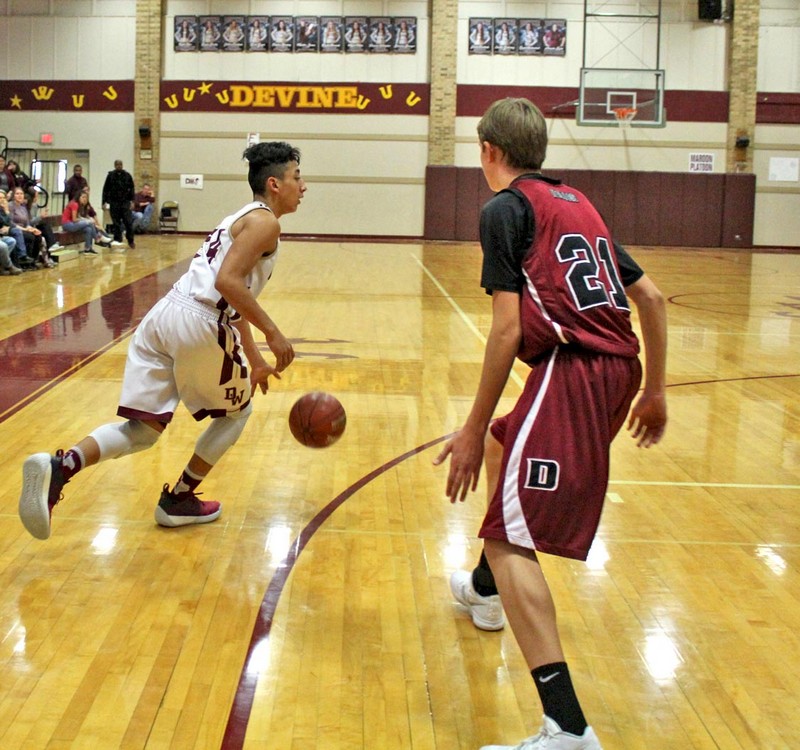 December 11th, the Freshman Warhorses fell to Navarro. It was a tough defeat for the young team. They came out strong with the lead at the end of the first quarter 9-4, but Navarro fought back and at the end of the second they were only down by one.
In the third quarter, the Warhorses struggled to keep up and fell behind 24-27. Not giving up they continued to play hard and keep Navarro from running away with the game. It ended 30-38 after a hard fought fourth quarter.
“The game against Navarro didn’t go as planned. We got off to a fast start, but could not sustain it for four quarters of basketball. This team is still learning how to win, and how to bring a certain level of competitive fire to the court every game. It’s a process but I know we will get there,” said Coach Quenton Sanders.
Brian Schaefer and Xavier Contreras each had 8 points, Peyton Carr 7, Angel Espinoza 5, and Zack Rico 2. Scores by quarter: Q1 9-4, Q2 16-15, Q3 24-27, Q4 30-38.
Home Tournament
In their second home tournament of the year, the Freshman Warhorses finished undefeated. Coach Sanders and his team played four great games last Thursday and Friday.
McMullen was the first to fall to the young Warhorses on Thursday. Taking control of the game early was key to beating McMullen and they allowed the Cowboys 7 points in the first quarter and 10 in the second while they scored 16 and 11. The third quarter was a little rougher and McMullen came back to only being down 6 points. In the final quarter, the Warhorses kept playing strong and won 55-48.
Carr 14 points, Schaefer and Contreras 10 each, Cody Trammel 7, Cruz 4, and Chris Ortiz, Zack Rico and Jacito Solis with 2 each. Scores by quarter: Q1 16-7, Q2 27-17, Q3 40-34, Q4 55-48.
Cotulla started off looking like an easy win but in the fourth quarter, the Warhorses let their guard down and Cotulla came back from being 18 points down to within 4 at the final buzzer.
Carr 16 points, Schaefer 10, Trammel and Contreras with 7 each, Cruz 4, and Espinoza 2. Scores by quarter: Q1 10-5, Q2 24-11, Q3 36-18, Q4 48-44.
Saturday against Dilley, the Warhorses had to work hard for the win. The first quarter was rough and the Freshman found themselves down 2-17. They started their comeback in the second but were still behind 14-30. Something was said during half time that lit a fire under them and they had the lead by the end of the third 35-34. The fourth quarter was a battle until the very end when Devine came out on top 50-46. This was a big upset for Dilley.
Schaefer 17 points, Carr 11, Contreras 10, Ortiz 7, Trammel 3, and Rico 2. Scores by quarter: Q1 2-17, Q2 14-30, Q3 35-34, Q4 50-46.
The final game of the tournament was against Pearsall and it was in Devine’s favor the whole game. Coming out amped up after their victory over Dilley, the Warhorses quickly took control of the game. Leading 18-14 at the end of the first, the Warhorses played aggressively against a strong opponent. They continued to run their offense and work hard on defense to keep their lead until the very end, winning 65-47.
Schaefer 20, Carr 19, Trammel 8, Contreras 6, Cruz and Ortiz 4 each, and Rico and Solis 2 each. Scores by quarter: Q1 18-14, Q2 41-30, A3 57-37, A4 65-47.
“I have never been more proud of a group of kids as I am of this freshmen basketball team. We are starting to come around as a team, and are understanding what it takes to be successful on the court. We won the tournament, which is a great accomplishment that should not be over looked. It is the fight we showed versus Dilley that I am most proud of. We were down 2-17 in the first quarter, and fought all the way back to win a thriller. The final game against Pearsall scared me, because of the natural let down I expected after such a euphoric moment after beating Dilley. The team came out guns a blazing, and competed at a championship level. Going 4-0 over the weekend was sweet, but watching this team grow and mature as basketball team is what I enjoyed the most,” said Coach Sanders.
The Freshman Warhorses are currently 9-5 for the season. They will face Dilley Friday night and then be off for the holiday break with games picking back up on January 2nd against Blanco and the Cotulla on January 4th.
By Dicy Chambers
Sports Writer