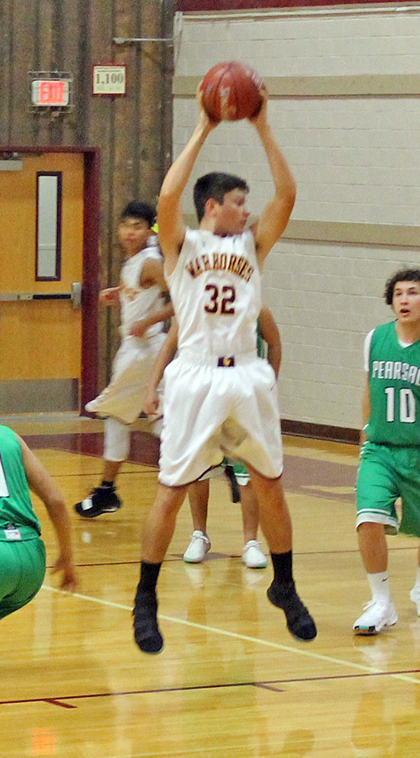 Hondo
Facing their rivals, the JV Warhorses worked hard to come from behind for their win. Trailing to the Hondo Owls 11-16 at the end of the first, the Warhorses knew that they could not let that lead grow. Becoming more aggressive and looking for better shots, they were ahead at the end of the half 25-24. The Warhorses fought to keep the lead in the third quarter and finally broke away from Hondo in the fourth and won 55-44.
“We started defensively much better than our previous games. We must continue to lead with a great defensive effort. We shared the ball on offense and it was a good win,” said Coach Evan Eads.
Jose Dozal led with 26 points, Xavier Contreras had 10, Matthew Madrid 4, Trace Seguin 4, John Schnautz 4 Weston Byrd 3, Ryan Applewhite 2, and Christian Gerlach 2.
Carrizo Springs
Friday night was a tough night of basketball for the JV Warhorses when they lost to Carrizo Springs 40-47. Trailing the entire game, the Warhorses worked hard to close the gap in the fourth but ran out of time before they could take the lead. Scores by quarter: Q1 8-10, Q2 19-25, Q3 25-39, Q4 40-47.
Jose Dozal led with 16 points, Xavier Contreras 6, Weston Byrd 5, Christian Gerlach and John Schnautz 4 each, Trace Seguin 3, and Mathew Madrid 2.
The JV Warhorses will be on the road for their final three games, Pearsall Friday night, Hondo February 8th, and Carrizo Springs February 12th.
By Dicy Chambers
Sports Writer