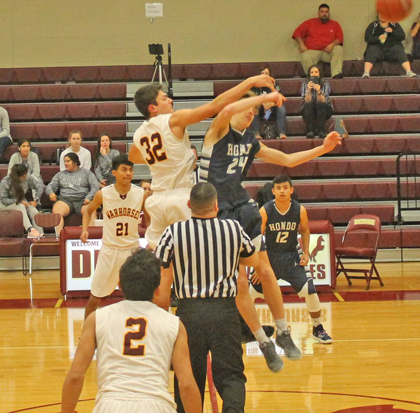 Crystal City
The JV Warhorses won their last home game of the season against Crystal City on January 28th. Tied at 16 at the end of the first quarter, Crystal City started to pull away and led 34-31 at the half and 48-45 at the end of the third. Devine kicked it into high gear and outshot the Javelinas 16-10 for the much needed home win. The final score was 61-58.
Matthew Madrid led with 23 points, Jose Dozal 14, Christian Gerlach 8, Hunter Farias and John Schnautz 4 points each, Xavier Contreras, Weston Byrd, Isaiah Rejino, and Trace Seguin 2 points each.
The JV Warhorses made 23 of 27 free throws. Scores by quarter: Q1 16-16, Q2 31-34, Q3 45-48, Q4 61-58.
Pearsall
In another exciting JV Warhorse basketball game, Devine won on the road. After a slow start in the first quarter, the Warhorses picked up their pace and played more aggressively. They took the lead by the end of the second quarter but the Mavericks were hot on their tails.
It came down to the final seconds of the fourth quarter with a final play. “Matthew Madrid received an inbound pass from Jose Dozal and after Christian Gerlach set a great screen, Madrid drove up the court with 3 seconds left, put up a runner that hit the back of the rim, popped up, and went in for the win,” said Coach Evan Eads.
Jose Dozal led with 18 points, followed by Matthew Madrid 14, Christian Gerlach 6, Trace Seguin 3, Hunter Farias, Isaiah Rejino, and John Schnautz with 2 each, and Xavier Contreras 1. Scores by quarter: Q1 12-17, Q2 27-21, Q3 35-28, Q4 48-42.
This exciting win was what the team needed with two more games left on the road. The JV Warhorses will play in Hondo on February 8th and then in Carrizo Springs February 12th.
By Dicy Chambers
Sports Writer