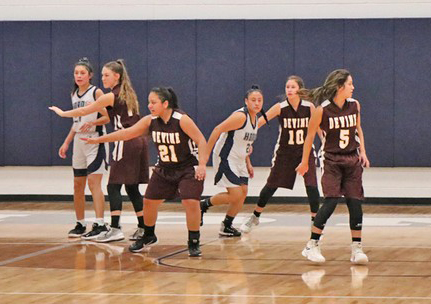 This team has stood together all season and tonight I wouldn’t expect anything different. As of late we have really begun to understand the team concept of sharing the ball, help defense and court vision. I am extremely pleased with our individual and group efforts. However, playing on the road will not be an easy game. We will have to endure a very hands-on defense. The last time we played in this gym, we not only received a championship trophy but two concust players.
The season started with road wins and two tournament championships. Playing and defeating JV teams, big schools like Medina Valley (2), Boerne, and La Vernia(2). By the time we finished our pre-district schedule undefeated, we were definitely battle tested. (12-0)
Winning the district championship, going undefeated in district, winning by an average of 25.25 points per game, we dominated. (8-0)
Tonight’s contest got off to a slow start offensively. However, we gained ground to finish strong. Again, Lacy Shook was in charge of the offense handling the ball and recording assist after assist. We would definitely be a different team with her. Yessika Garza was her same harassing self causing problems for Pearsall every time she was anywhere near the ball, she led our team in scoring and steals. Kendall Marek made four out of five threes in a practice drill, so we gave her the ball outside the line, and just like practice, she drilled another three. Emily Cruz has developed a nice shot so we designed a play for her to turn one loose at the three-point stripe and after one refusal to shoot the next time she drained it. This erupted the crowd and Emily had an even bigger smile than normal. Carmalina Bernall played good defense and caused a turnover. Marianna Hutton and Mayah Brogden and Cecelia Martinez were big on the boards fighting for every rebound. Devine won 44-10.
I am very proud of these girls for all their efforts, for all their success and for all the memories. This season was simply perfect.
Yesika Garza led all scorers with 21 points. Lacey Shook Scored 9 points and led our team in assists. Kendall Marek scored 7 points. Emily Cruz scored 3 points. Marianna Hutton scored 2 points. Mayah Brogden scored 2 points.
By Coach Mark Mangold