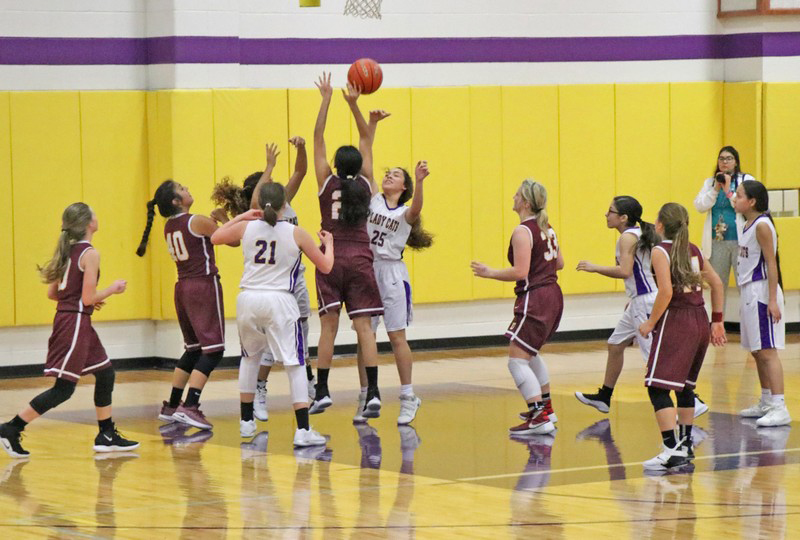 Hondo
Hondo was not an easy match for the JV Arabians on January 22nd. Down to a team of only seven players, the Arabians came out strong but could not keep up with Hondo and lost 19-37. Hondo kept their full court press on the Arabians most of the game and capitalized on the turnovers.
“We were making sharp passes, executing plays and playing very well on defense. Unfortunately, we did not execute our game plan in the second half which led to Hondo coming out with the win at the end of the game,” said Coach Hannah Thompson.
Janee Wofford scored 9 points, Jojo Villanueva 4, Brianna Bowyer and Analea Brooks 3 each. MacKenzie McClellen , Baleria Arana, and Pauline Calame also worked hard. Scores by quarter: Q1 2-9, Q2 10-13, Q3 13-28, Q4 19-37.
Carrizo Springs
Facing Carrizo Springs on January 25th, the JV Arabians again struggled in the second half to finish their plays in the low scoring game. The Arabians started off being at the end of the first quarter 4-10 but tied the game up by the half at 16-16 and kept it tied at the end of the third 18-18. Carrizo was able to out shoo them in the fourth for the win at 23-27.
“The Devine JV Girls started the game very strong by making jump shots, lay ups and playing well on the defensive side. However, the second half was not the same and Carrizo came out with the win.” Coach Hannah Thompson
Wofford scored 14 points, McClellen 4, Brooks and Bowyer 2 each, and Arana scored 1, with support from Calame and Jojo Villanueva.
Crystal City
In their second to last game, the JV Arabians were ready for a win against Crystal City.
“The girls came out ready to play hard and aggressive on the defensive end getting steals and getting on the ground for loose balls. On the offensive end, they executed plays very well against the Crystal City zone defense,” said Coach Thompson. “Janee Wofford put a game high of 17 points and hit a career high of 4 three pointers in a game. Brianna Bowyer had the next highest points with 13. Bowyer made great drives against the zone defense and hit her first 3 pointer of the season! Jojo Villanueva had 2 points off of a put back, Analea Brooks finished with 6 points, Mackenzie McClellen finished with 9 points and Baleria Arana with 4 points. Both Mackenzie and Baleria grabbed great rebounds throughout the night. Pauline Calame played great defense throughout the game and got 2 steals. Overall it was a great night for the Devine JV Girls and they did a great job against Crystal City.”
Wofford led with 17 points, Bowyer 13, McClellan 9, Brooks 6, Baleria Arana 4, and Villanueva 2. Scores by quarter: Q1 13-4, Q2 23-12, Q3 34-20, Q4 57-28.
By Dicy Chambers
Sports Writer