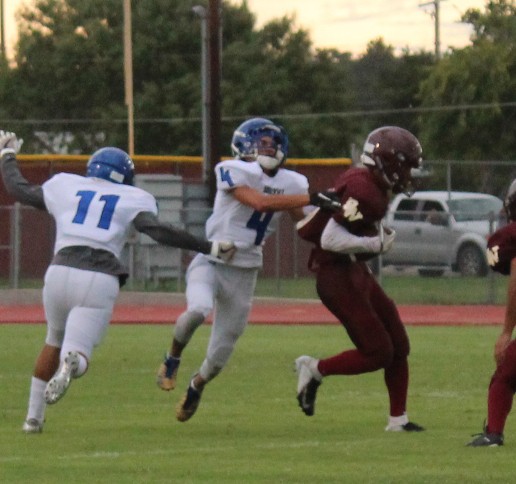 Devine’s JV football team gave the Somerset Bulldogs all they could handle last Thursday evening in Warhorse Stadium. Down six with four minutes to go, the Horses simply could not put a final drive together to come out with the possible victory. Devine fell 20-8 and saw their record drop to 1-1 on the season.
“It was 14-8 with about four minutes left,” according to Coach Scott Taylor. “Coach Heath Poppe called for a punt in hopes of pinning the Bulldogs deep into their own territory. It was a great strategy considering we still had our three timeouts remaining.”
A fumbled snap gave Somerset the ball and a short field. They went on to punch the ball into the end zone to pull out the twelve-point victory.
Although the JV defense did not get that particular stop, they did get stops through most of the ballgame. The offense struggled a little bit against the Bulldog’s defense.
“I personally feel our defense should be solid for three plays,” continued Taylor. “Too many times we gave up long yardage on a 3rd-down play that would allow them to get the first down and continue their drive. We did create one turnover that gave the offense a short field and then the offense was able to turn that into our only touchdown of the night.”
A couple of Warhorses stood out on the evening according to the coaches. Cesar Rodriguez played well at linebacker and Devon Ornelas played well on the line using his quickness to beat the bigger offensive linemen.
“Honestly, our entire effort was solid; we just couldn’t get the stop we needed at the end of the game,” Taylor said. “We will continue to work and improve as an entire unit.”
There will only be one game this week due to the combination of the JV and Freshmen teams. Kickoff is set for 5:00pm.
By Jerel Beaty
Staff Writer